Shortly before 9 p.m. on the evening of August 26th the BBC News website published a report concerning a terror attack which had taken place some seven hours earlier. 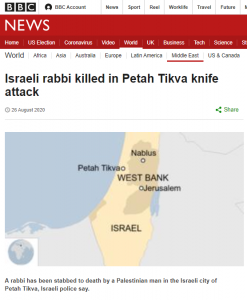 Both the presentation on the website’s ‘Middle East’ page – “Rabbi stabbed to death in Israeli city” – and the report’s headline – ‘Israeli rabbi killed in Petah Tikva knife attack’ – failed to clarify to the corporation’s audiences that the incident was a terror attack.

In line with BBC’s selectively applied editorial policy, the only description of the attack as terrorism – which appeared in the fourth paragraph of the report – was attributed to a non-BBC source.

“Investigators said they were treating the incident as a terrorist attack.”

“Earlier on Wednesday, Mr Netanyahu shared an article on Facebook that said no Israeli civilian had been killed in a terrorist attack for 12 months for the first time in 56 years, the Jerusalem Post reported.”

They were not however informed that an Israeli soldier was murdered in May in an attack that the BBC failed to report at the time or that in September 2019 a 74-year-old woman who had been seriously injured in a rocket attack on Ashkelon the previous November passed away.

At the end of the report readers were told that: [emphasis added]

“Since 2015, dozens of Israelis have been killed in a wave of stabbings, shootings and car-rammings, predominantly by Palestinians, in Israel and the West Bank.

Hundreds of Palestinians – most of them assailants, Israel says – have also been killed in that period, according to news agencies.

Others have been killed in clashes with Israeli troops.”

Eighty-nine Israelis were murdered in terror attacks between January 2015 and August 2020. The BBC News website’s record of reporting fatalities throughout that time stands at an average of 86.4% and only in one year – 2016 – were all the terror related fatalities reported.

It is hence unsurprising that the BBC is unable to provide its audiences with an accurate account of the number of Israelis murdered in terror attacks.