On September 21st the BBC News website published a report headlined “Bulgaria court convicts two over 2012 Burgas bus attack on Israelis” in which readers found the usual euphemism employed by the corporation to describe persons or organisations that target Israelis, along with amplification of a terrorist organisation’s claims. 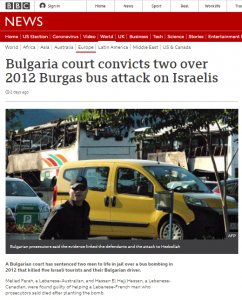 A Bulgarian court has sentenced two men to life in jail over a bus bombing in 2012 that killed five Israeli tourists and their Bulgarian driver. […]

Hezbollah has been accused of carrying out a string of bombings and plots against Jewish and Israeli targets, and it is designated a terrorist organisation by several Western states and Israel.

The EU put Hezbollah’s military wing on its terrorism blacklist after the bombing.” [emphasis added]

Clearly that reference to “several Western states” does not adequately clarify to BBC audiences that Hizballah is also designated a terrorist organisation  by the Arab league, the Gulf Cooperation Council, Bahrain, the UAE, Japan, Argentina, Honduras and Paraguay, among others. The recent designation by Serbia has not yet been reported to BBC News website audiences.

The caption to the image illustrating the report reads “Bulgarian prosecutors said the evidence linked the defendants and the attack to Hezbollah” and readers are later told that:

“Prosecutors accused them of providing the explosive device and logistical support to El-Husseini, and said the evidence linked them to Hezbollah.”

The report’s final paragraph appears to suggest that the BBC sourced its information from the Reuters news agency:

“”The court’s sentence reflects the punishment we asked for and is adequate to the committed crimes. Whether it will be served or not will be a result of the search of the wanted persons, which is ongoing,” Prosecutor Evgeniya Shtarkelova was quoted as saying by Reuters news agency.”

With regard to the defendants’ links to Hizballah, Reuters was able to report that:

“Shtarkelova has said the men had used fake driving licences printed in Lebanon, that the attackers had family links to Hezbollah and that the use in the bomb of ammonium nitrate, an industrial chemical used in fertiliser, pointed to the group.

The AFP news agency – which provides services to the BBC – reported that:

“Shtarkelova […] said that the nature of the explosive device, the fake US driver’s licenses used by the two men, their Lebanese descent and some family ties “link both defendants (…) and the attack to the terrorist organization Hezbollah.”

The investigation into the attack found that the fake licenses were made by the same printer at a university in Lebanon. It also said the suspects received money from people linked to Hezbollah.

In recent comments on the case, Bulgaria’s chief prosecutor Ivan Geshev stressed that Hezbollah was behind the attack “in terms of logistics and financing.””

Notably, the BBC elected not to provide its audiences with those details, despite its original reporting on the attack in 2012 having described the Israeli prime minister as being “quick to point the finger” and its having provided a platform for Hizballah’s denial of involvement: see one example here.