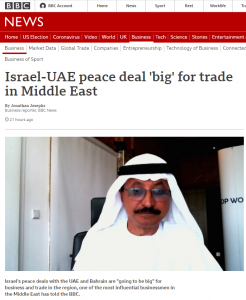 The report includes the BBC’s first (and to date, sole) reference to a vote in the Knesset the previous day:

“This week, the MSC Paris became one of the first cargo ships to make the voyage between the two countries, and Israel’s parliament formally approved the treaty with the United Arab Emirates.”

The promoted link leads readers to a document including versions of the agreement signed by Israel and the UAE in three languages: Hebrew, English and Arabic.

Notably while the BBC’s report correctly informs the corporation’s audiences that the Knesset approved the agreement on October 15th, it does not tell them that members of the third largest faction in Israel’s current parliament voted against it.

“Eighty lawmakers voted in favor of the agreement, including many from the opposition.

Only 13 parliamentarians — all from the Arab-majority Joint List — voted against the agreement, criticizing it as a scheme to undermine the Palestinian people. […]

Thirteen of the Joint List’s 15 MKs voted against the agreement, but not party head Ayman Odeh, who was absent from the plenary due to his infection with the coronavirus.”

Mr Odeh did however make his opinion known prior to the vote:

“Ayman Odeh, chairman of the Joint List, said the only deal that would bring peace and prosperity to the region would be a peace agreement creating an independent Palestinian state alongside Israel. “The deal being signed today is part of Trump’s dangerous vision that … will perpetuate the military regime on millions of Palestinians, the settlements and the outposts,” he wrote in a tweet before the vote.”

“MK Ayman Odeh, head of the majority-Arab Joint List Knesset faction, has said Israel’s normalization agreements with the United Arab Emirates and Bahrain were based on a “twisted logic,” and insisted that the Palestinian issue, rather than Iran, should be the region’s main concern.

Asked during an interview with Lebanese television station al-Mayadeen, affiliated with the Hezbollah terror group, why 13 of the Joint List’s 15 lawmakers had voted to strike down the agreements, Odeh said the Abraham Accords “are based on a flawed assumption: that the fundamental issue in the East is the Iranian question, and not the Palestinian question, and that there must be an alliance” to defeat it.”

We have previously documented the BBC’s reluctance to provide its audiences with information concerning the politics and ideologies of the Joint Arab List (see ‘related articles’ below). It is perhaps therefore not surprising that the BBC appears not find the fact that the sole opposition to the normalisation of relations between Israel and the UAE came from that particular list even remotely newsworthy.