A Telegraph report (“Palestinian village sets up surveillance system to ward off marauding settlers”, Oct. 19) included unsubstantiated claims on the number of Israeli settler attacks on Palestinians – figures contradicted by the UN agency tasked with monitoring such violence.

Here are the relevant paragraphs from the Telegraph report by James Rothwell:

For more than a decade, the villagers of Kisan say they have been harassed and beaten by Israeli settlers in the West Bank.

Now, the close-knit Palestinian community is taking matters into its own hands with a camera security system that will monitor settler attacks and may prove useful in prosecuting those responsible.

“They are attacking us day and night, in our houses, on our farms and on the roads,” said Ibrahim Abbyat, a 49-year-old ex-Palestinian National Security Forces officer and member of Kisan’s village council. “They have gone mad.”

After being told that attacks occur “day and night“, we’re given a specific figure in the journalist’s own voice a few paragraphs down:

After some 400 incidents in Kisan and the surrounding area, the villagers say they have had enough and installed a camera system that can monitor clashes with the settlers and hopefully provide evidence for prosecutors.

However, our research shows that – as we pointed out in a post about a Guardian op-ed claiming ‘daily’ settler violence – this narrative is not supported by the evidence.

So, we conducted a search over the last year within Kisan, the village focused on in the Telegraph report, and it turns out that there was 1 incident of a Palestinian injured by a settler. 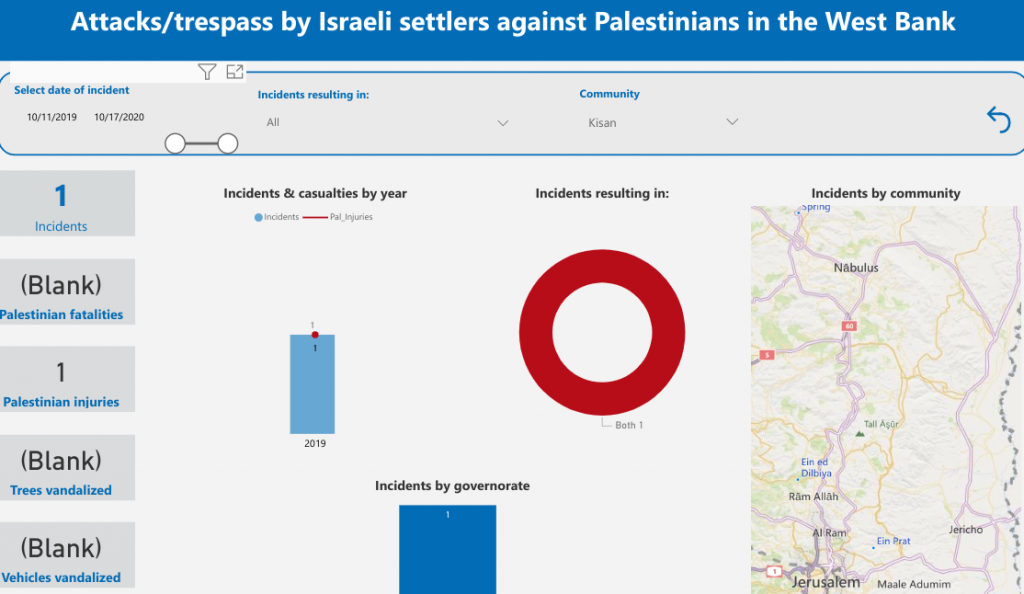 Then, we expanded our search to the entire West Bank to get a better sense of the overall level of settler attacks.  As you can see, there were a total of 58 violent incidents over the last year resulting in 97 Palestinian injuries. 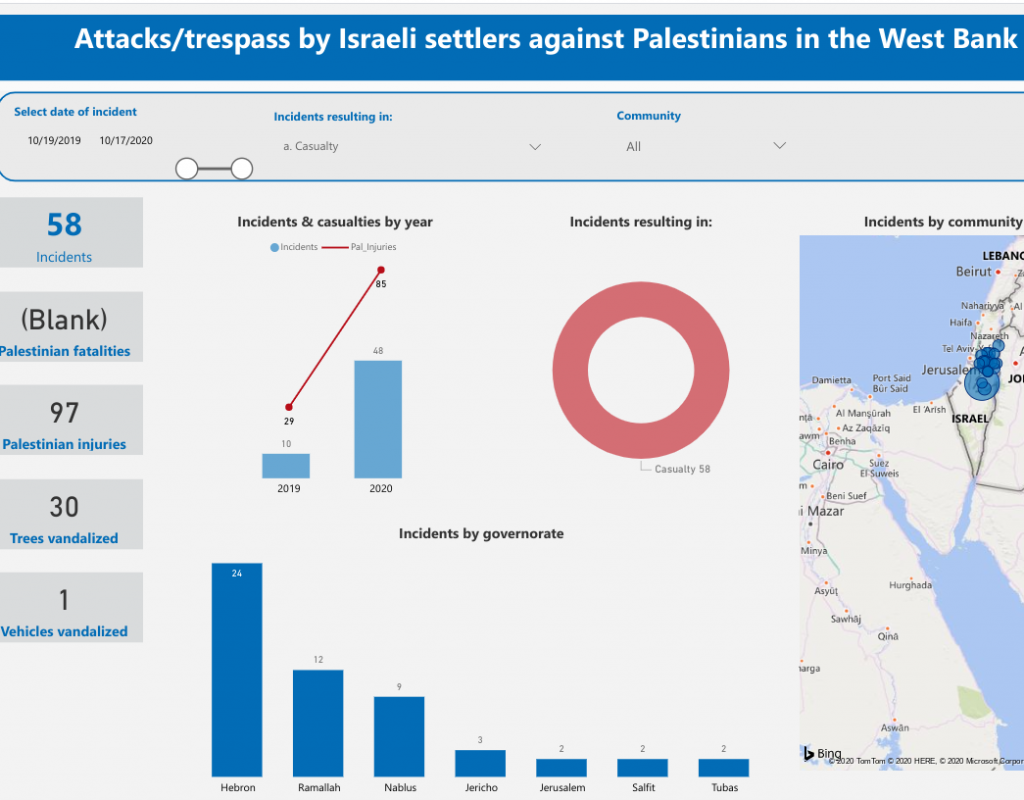 So, where did the Telegraph get the 400 figure from?

Well, Reuters published a similar story a week ago (“Palestinian village installs cameras, accusing Israeli settlers of attacks”, Oct. 7), which quoted Ali Faraj, co-founder of the Palestinian camera project highlighted in the Telegraph article, claiming more than 450 such incidents in Kisan and the surrounding area.

So, the 400+ figure appears to be nothing more than an unsubstantiated Palestinian claim.

To be fair, there’s lots of tree and car vandalism in the West Bank – with thousands of reported incidents – putatively by settlers, per the UN database.  But, physical violence is of course not the same thing as vandalism, which is an important distinction given that the article uses wording (“they are attacking us“, Palestinians have been “beaten”) suggesting daily occurrences of the former.

We’ve been in touch with the Telegraph, and asked that they either provide a credible source for the 400 figure, or clarify to readers that it’s merely an unverified Palestinian claim.