This is a Tweet sent by the PLO’s negotiations affairs department on the afternoon of October 18th:

Even before that Tweet was posted it was known that Saeb Erekat had in fact been taken to a hospital in Jerusalem – Hadassah Ein Kerem – rather than one “in Tel Aviv” and the PLO-NAD put out another Tweet clarifying that about 90 minutes later.

Some seven hours after the appearance of the PLO’s first Tweet, the BBC News website published a report about Erekat’s hospitalisation – obviously without adequate fact checking.

The original version of that report was headlined “Covid-19: Top Palestinian official Saeb Erekat taken to Israeli hospital” and, like the PLO’s first Tweet, it wrongly informed readers that he had been “admitted to hospital in Tel Aviv, Israel”. 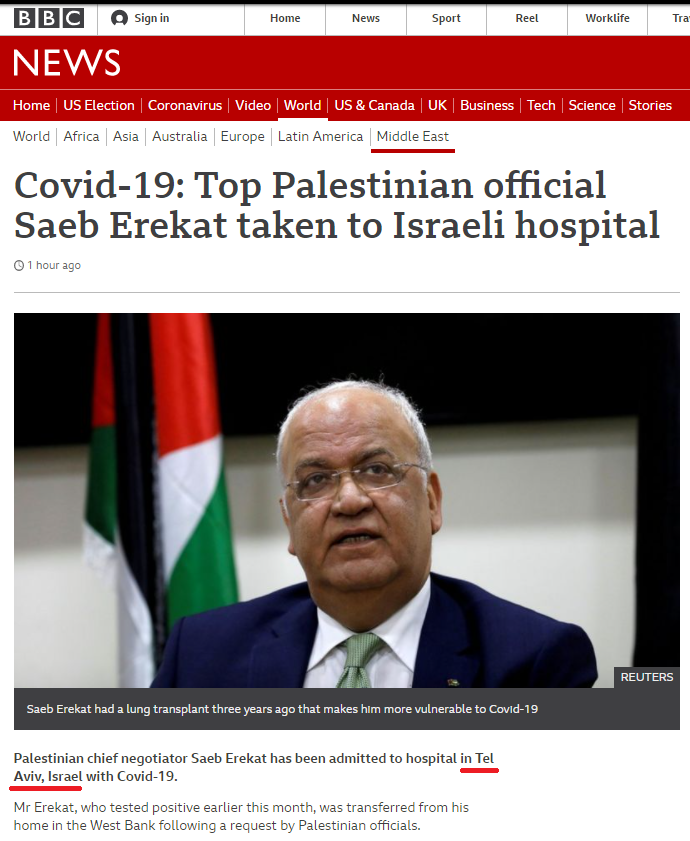 Several hours later the article was amended and its subsequent versions, which were titled “Covid-19: Top Palestinian official Saeb Erekat in ‘serious’ condition”, told readers that:

“Earlier on Sunday Mr Erekat was transferred from his home in the West Bank to Hadassah University Hospital – Ein Karem, near Jerusalem.” [emphasis added]

The hospital is located in – rather than “near” – Jerusalem, as is acknowledged in the latest version of the report which is now titled “Coronavirus: Top Palestinian official Saeb Erekat in ‘critical’ condition“.

In June of this year the BBC produced a report on the topic of “How a worsening of relations with Israel is affecting the health of Palestinians” in which audiences were told that:

“Last month the Palestinian president said his government was giving up on past peace agreements [sic] with Israel because of its plans to annex parts of the occupied West Bank. As our Middle East correspondent Yolande Knell explains, that decision stopped cooperation on many security and civil matters, including the issuing of medical travel permits.” [emphasis added]

Nevertheless, this BBC report about the treatment of a “top Palestinian official” in an Israeli hospital makes no mention of the fact that ordinary Palestinians have in recent months found it impossible or very difficult to get healthcare in Israel because of coordination on payment and permits being halted by order of the Palestinian Authority’s highest officials.