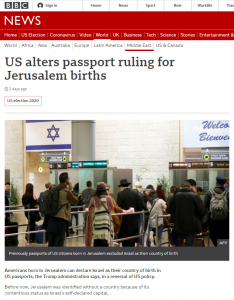 “Americans born in Jerusalem can declare Israel as their country of birth in US passports, the Trump administration says, in a reversal of US policy.

Before now, Jerusalem was identified without a country because of its contentious status as Israel’s self-declared capital.”

Seeing as countries have long chosen – and sometimes changed – their own capital cities, that highlighted statement may be confusing to readers unfamiliar with the BBC’s long-standing approach to the topic of Israel’s capital.

The BBC Academy’s style guide on ‘Israel and the Palestinians’ states:

“The BBC does not call Jerusalem the ‘capital’ of Israel, though of course BBC journalists can report that Israel claims it as such. If you need a phrase you can call it Israel’s ‘seat of government’, and you can also report that all foreign embassies are in Tel Aviv. This position was endorsed by the findings of a BBC Trust complaints hearing published in February 2013.”

Those wishing to understand why the BBC imperiously refuses to call even the parts of Jerusalem which were not occupied by Jordan between 1948 and 1967 the capital of Israel can find the background to that policy decision here.

“The [BBC Trust’s Editorial Standards] Committee noted that while there is no expectation that in a two-state solution West Jerusalem would become Palestinian territory, a UN resolution passed in 1947 has not been rescinded. It calls for the whole of Jerusalem to be an international city, a corpus separatum (similar to the Vatican City), and in that context, technically, West Jerusalem is not Israeli sovereign territory. “

In other words the BBC erroneously claims that the unimplemented 1947 UN Partition Plan – i.e. UN GA resolution 181 which was rejected by Arab states and the Palestinians – has some sort of contemporary relevance or validity and on that basis dictates that all of Jerusalem “is not Israeli sovereign territory”.

Interestingly, the ‘rationale’ behind the BBC’s not calling Jerusalem the capital of Israel does not prevent it from going on to amplify Palestinian claims to parts of the city:

“Palestinians claim the occupied East as the capital of a hoped-for state.”

The article continues with another long-promoted talking point:

“President Trump’s decision to recognise Jerusalem as Israel’s capital broke with decades of US policy and was met with outrage across the Arab world.”

Once again the BBC elected to conceal the fact that the US Congress voted to recognise Jerusalem as Israel’s capital two and a half decades ago.

As ever, the BBC’s presentation of historical background commences in June 1967, ignoring the Jordanian invasion and illegal occupation of parts of the city and airbrushing its status under the terms of the League of Nations Mandate for Palestine from audience view.

“Israel occupied East Jerusalem in the 1967 Middle East war and later effectively annexed it in a move not recognised internationally.”

Towards the end of the report readers are told that:

“In January, Mr Trump unveiled a roadmap for peace between Israel and the Palestinians which did not advocate a two-state solution – a formula supported by the international community which envisages an independent Palestinian state existing alongside Israel.”

The US Administration’s ‘Peace to Prosperity’ proposal states: [emphasis added]

“Palestinians and Israelis alike deserve a future of peace and prosperity. A realistic two-state solution will protect Israel’s security, fulfill the aspirations of self-determination for the Palestinian people, and ensure universal and respectful access to the holy sites of Jerusalem.

In other words, the BBC’s claim that “Mr Trump unveiled a roadmap for peace between Israel and the Palestinians which did not advocate a two-state solution” is inaccurate and misleading to audiences.

Why does the BBC Trust’s ESC pretend that the 1947 Partition Plan is a thing?

BBC News gets Israel’s capital city right – and then ‘corrects’