Earlier this week we discussed amendments made on March 11th to a report by the BBC’s fact-checking arm ‘Reality Check’ which had previously appeared on the BBC News website’s ‘Middle East’ page between January 26th and February 16th.

On March 15th a further amended version of that report – retitled “Covid-19: Palestinians lag behind in vaccine efforts as infections rise” – was republished on the BBC News website’s ‘Middle East’ page where it remained until March 17th. 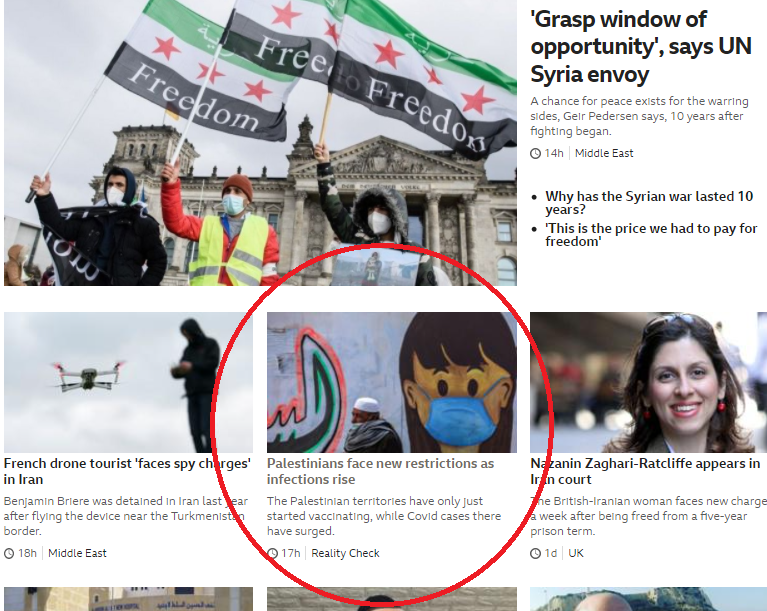 As in the previous version, readers were told that:

“The international Covax scheme, backed by the WHO, should cover up to 20% of vaccine requirements for the Palestinians. 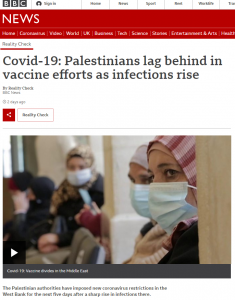 This is a global effort to get vaccines to poorer countries, which may not be able to secure enough supplies on their own.

Covax has said that the West Bank and Gaza would get an initial 240,000 doses of AstraZeneca vaccine, and 37,440 doses of Pfizer-BioNTech vaccine, but these have not yet arrived.” [emphasis added]

In fact, on the very day that article was taken down the COVAX scheme delivered over sixty thousand doses.

“Around 61,440 doses of coronavirus vaccine earmarked for the Palestinian Authority reached Ramallah on Wednesday after arriving in Ben Gurion airport earlier the same day. […]

The Palestinian Authority said that vaccination would begin on Sunday, primarily for those aged over 75, cancer patients and medical personnel.

Around 37,440 of the vaccines that arrived on Wednesday were Pfizer vaccines, while the remaining 24,000 were AstraZeneca vaccines, said a spokesperson for the United Nations International Children’s Emergency Fund (UNICEF). The UN agency plays a key role in vaccinating Palestinians, especially in the Gaza Strip.

Some 20,000 doses from the shipment was to be sent to Gaza later in the day, the Israeli Defense Ministry official said. […]

“We will hold onto the AstraZeneca doses until there is a scientific opinion on the matter by the World Health Organization,” PA Health Minister Mai al-Kaila told Voice of Palestine Radio on Wednesday.”

The WHO put out a statement recommending continued use of the AstraZeneca vaccine on the same day.

Not only has the ‘Reality Check’ report yet to be updated to reflect that latest development but to date BBC audiences have also not seen any other reporting whatsoever on the COVAX scheme’s delivery of vaccinations to the Palestinian Authority.