Over the years we have all too often had cause to document the BBC’s amplification and mainstreaming of the Livingstone Formulation. That term was coined in 2006 by David Hirsh and its origin is described by him as follows:

“In February 2005, Ken Livingstone, then the mayor of London, became involved in an apparently trivial late night argument with a reporter after a party at City Hall.  Oliver Finegold asked him how the party had been.  Livingstone was angry because he felt Finegold was intruding.  There was a little banter to and fro, in which the reporter said that he was only trying to do his job. Livingstone fixed on that phrase and retorted by asking him whether he had previously been a ‘German war criminal’.  Finegold replied that he hadn’t, and that he was Jewish, and that he was offended by the suggestion.  Livingstone went on to insist that Finegold was behaving just like a ‘German war criminal’, that his newspaper, The Standard, ‘was a load of scumbags and reactionary bigots’ and that it had a record of supporting Fascism (Transcript 2006).

Instead of apologizing for his comments in the sober light of day Livingstone treated the publication of this exchange as a political opportunity rather than a gaffe.  He wrote an article criticizing Ariel Sharon, then the Prime Minister of Israel.  In that article he responded to charges of antisemitism which had been made in relation to the Finegold affair with the following words:

For far too long the accusation of antisemitism has been used against anyone who is critical of the policies of the Israeli government, as I have been (Livingstone 2006).

This is the Livingstone Formulation.  It is a response to a charge of antisemitism.  It is a rhetorical device which enables the user to refuse to engage with the charge made.  It is a mirror which bounces back onto an accuser of antisemitism a counter-charge of dishonest Jewish (or ‘Zionist’) conspiracy.

The day after the publication of the results of the Equalities and Human Rights Commission’s investigation into antisemitism in the Labour party, David Hirsh had an article published in the Jewish Chronicle in which he wrote:

“[Jeremy Corbyn] has had the whip taken away from him for what he did this morning, in response to the report, for employing the ‘Livingstone Formulation’. He protested that the scale of the problem of antisemitism was “dramatically overstated for political reasons by our opponents … as well as by much of the media.””

The EHRC has crystallised a new legal precedent that the ‘Livingstone Formulation’ is antisemitic. It has added to the IHRA definition of antisemitism a new archetype of antisemitic behaviour.”

“Livingstone himself was thrown overboard by the Corbynites in an effort to save their own skins and he has now been singled out in the EHRC report as a key example of Labour antisemitism.”

The part of the EHRC report to which Hirsh refers appears on page 28. 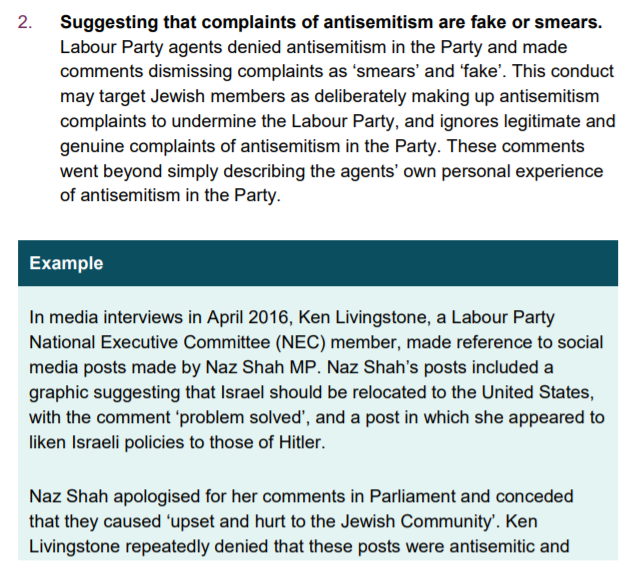 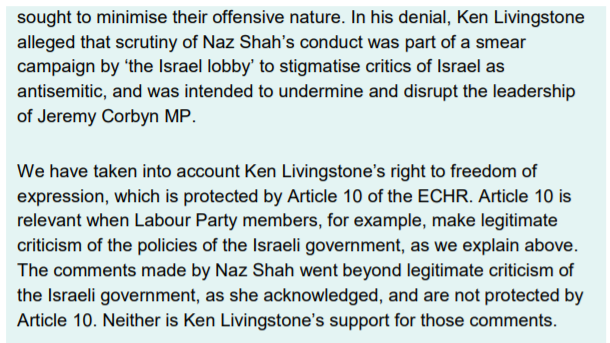 On the day that the EHRC published its findings (October 29th) the BBC News website amended and repromoted a backgrounder titled ‘A guide to Labour Party anti-Semitism claims’. That “general guide”, as the BBC has described it, has been online since August 1st 2018 and has been amended and updated at least 13 times since its initial publication. 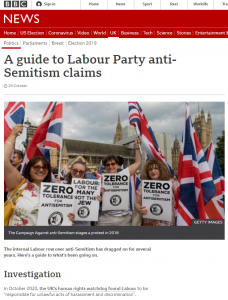 An earlier version of that backgrounder – published on the day that the EHRC announced that it had launched a formal investigation into the UK Labour party in order to determine whether it has “unlawfully discriminated against, harassed or victimised people because they are Jewish” – was discussed here in June 2019 and at the time we noted its amplification of the Livingstone Formulation:

“Readers then saw the latest example of BBC promotion of the Livingstone Formulation.

“Some say “Zionist” can be used as a coded attack on Jewish people, while others say the Israeli government and its supporters are deliberately confusing anti-Zionism with anti-Semitism to avoid criticism.””

Remarkably, the latest version of the BBC’s backgrounder ignores the EHRC’s findings on that issue and promotes the exact same ‘he says-she says’ paragraph under the sub-heading “How does it relate to Israel?”. 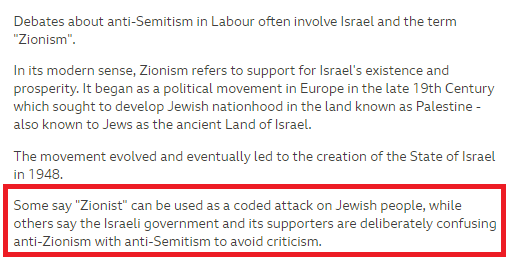 At the bottom of that section readers are offered a link titled ‘Read more about the difference between anti-Semitism and anti-Zionism’ which leads to a highly problematic BBC backgrounder produced in late April 2016. As was noted here when that item was first published:

“…the article focuses on promoting the inaccurate and misleading notion that anti-Zionism is the same thing as expressing criticism of the policies and actions of the Israeli government. […] To make matters even worse, the article amplifies the ‘Zionism is racism’ canard and the ‘apartheid’ fabrication…”

That promoted 2016 backgrounder includes the exact same presentation of the Livingstone Formulation as is found in the October 29th version of the “general guide” to what the BBC persists in calling “Labour Party anti-Semitism claims” despite the publication of the EHRC’s findings. It also still amplifies related claims made by a known anti-Israel activist and a fringe political group:

“On the other hand, it’s regularly claimed that accusations of anti-Semitism are deployed to silence criticism of the Israeli government or to further other political ends.

Pia Feig, of Manchester Jews for Justice for Palestinians, told BBC Radio 2’s Jeremy Vine programme that “anti-Semitism has been used to quieten down and suppress my concern and the concern of other people for Palestinians”.

In a statement after Livingstone’s suspension, the Jewish Socialists’ Group said accusations of anti-Semitism were being “weaponised” to attack the leadership of Jeremy Corbyn.”

While there are certainly additional points to be made about this amended version of a BBC backgrounder which is supposed to inform audiences about antisemitism in the Labour party, its continued uncritical amplification of the Livingstone Formulation even after that had been ruled “unlawful harassment” by the EHRC is clearly the most remarkable.

Once again we see that despite its own dismal record and the plethora of evidence showing that the BBC does not have the authority or the expertise – let alone the remit – to define antisemitism, it continues to purport to ‘explain’ that topic to its audiences.