Shortly after the announcement of his death on November 10th the BBC News website published an article headlined “Saeb Erekat: Key Palestinian negotiator dies of Covid-19”. 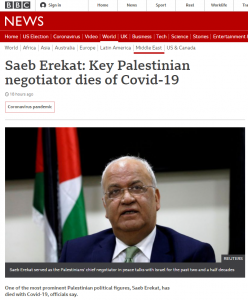 “Erekat led the Palestinians in on-off peace talks with Israel for many years. […]

He helped negotiate the landmark Oslo Accords in 1993, which created the Palestinian Authority and gave Palestinians limited self-governance in the West Bank and Gaza Strip for the first time since Israel occupied the territories in 1967.”

Contrary to what some readers may understand, Palestinian self-governance in the Gaza Strip and in Area A is of course not “limited”.

Regarding his chosen positions, readers are told that:

“Erekat was a proponent of the so-called two-state solution – an independent Palestinian state alongside Israel – to the Israel-Palestinian conflict, and recently condemned moves by Arab states to normalise relations with Israel without it.”

The BBC did not bother to clarify that Erekat’s idea of the two-state solution was a Palestinian state on what he repeatedly but erroneously termed “the 1967 borders” alongside an Israeli state which would include Palestinian refugees given the ‘right of return’. In a 2008 interview he described the issue of Palestinian refugees as “the essence of the Palestinian question”, claiming that:

“The refugees’ right to return is a national right and an individual right. The right of the individual refugee is to decide: to go back to Israel proper or to the Palestinian state; they should have options.”

Two years later, Erekat wrote an op-ed published at the Guardian in which he promoted the same position, stating that:

“Today, Palestinian refugees constitute more than 7 million people worldwide – 70% of the entire Palestinian population. Disregarding their legitimate legal rights enshrined in international law, their understandable grievances accrued over prolonged displacement, and their aspirations to return to their homeland, would certainly make any peace deal signed with Israel completely untenable.”

BBC audiences, however, are not informed of Erekat’s position on that issue or how that demand has been detrimental to efforts to reach the two-state solution which the corporation claims he advocated. Neither are they told of Erekat’s own role in ensuring that throughout nearly three decades as a ‘negotiator’, he failed to achieve his ostensible goal.

Readers are however given a superficial overview of Erekat’s involvement in failed negotiations which does not include any information as to why initiatives such as the Camp David summit and subsequent others failed to produce results.

“He attended the Camp David summit with Arafat in 2000, represented the Palestinians at the Taba Negotiations in 2001, and worked with Arafat’s successor Mahmoud Abbas at the Annapolis Conference in 2007.

All of the meetings ended without agreement on the “final status” issues that the Oslo accords had left aside for later negotiation, such as borders, Jerusalem and refugees.”

Moreover, ‘analysis’ provided to readers of this article by the BBC Jerusalem bureau’s Yolande Knell strips Erekat and his colleagues of any responsibility for the ‘dim prospects’ brought about by policies such as the refusal to engage with the US administration in recent years.

“Palestinians will feel his loss deeply at a time when relations with Israel are at a new low – and prospects for the creation of an independent Palestinian state, the goal of his life’s work, look increasingly dim.”

The BBC’s report informs readers that:

In 2009, he was elected to both the PLO Executive Committee – its top decision-making body – and the Central Committee of Mr Abbas’ Fatah movement. Six years later he became the PLO’s secretary general.”

No mention is made of the relevant issue of the PA and PLO policy of payment of salaries to terrorists and their families which Erekat defended in print only last year. Neither did the BBC bother to remind readers of Erekat’s central role in the promotion of the myth of a ‘massacre’ in Jenin in 2002 (a myth which remains online in BBC archive content to this day).

Over the years Saeb Erekat was regularly given BBC platforms from which to promote his propaganda to audiences worldwide. Just as BBC journalists largely failed to challenge his often bizarre and always politicised claims in those articles and broadcasts, the writer of this article promotes the image of Erekat as a frustrated ‘peacemaker’ by erasing the narrative-conflicting parts of the story.