Among the BBC News website’s coverage of the release of the Australian academic imprisoned by the Iranian regime for over two years is a November 26th report headlined “Kylie Moore-Gilbert: Thailand frees Iranians ‘in swap with academic’”. 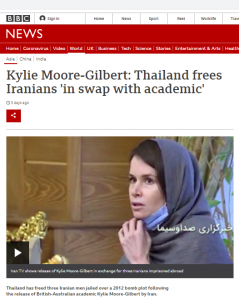 Iranian media say the releases are part of a swap for the lecturer, who was held on spying charges she denies.

Two Iranians had been deported, while a third was pardoned in August, Thai officials said. The botched bombing in Bangkok was apparently aimed at Israel.” [emphasis added]

The BBC’s use of the word ‘apparently’ is particularly noteworthy given that the link promoted in that sentence leads to a BBC report from August 2013 in which – as noted here at the time – the BBC failed to provide the full information concerning additional attacks against Israeli diplomats but did amplify Iranian denials.

The report goes on: [emphasis added]

“The [Thai] kingdom’s Department of Corrections said Masoud Sedaghatzadeh and Saeid Moradi were transferred back to Iran on Wednesday under a mutual treaty on prisoners. It named the third man freed as Mohammad Khazaei, saying he had received a royal pardon in August and was released in September.

The trio had been jailed over a plot that Israel said was aimed at its diplomats. It came to light when bombs apparently detonated by accident in a house in suburban Bangkok on 14 February 2012.

Moradi was jailed for life for attempted murder after he threw a bomb at police as he tried to escape. He lost his legs in one of the explosions. Khazaei, who was detained at the airport, was jailed for 15 years.

Sedaghatzadeh fled to Malaysia and was later extradited to Thailand.”

Readers are not informed that the investigation by the police in India into an attack that took place the day before the incident in Bangkok indicated that members of the Iranian Revolutionary Guards were behind that attack or that Sedaghatzadeh “is alleged to have engineered attempted attacks in Tbilisi, Georgia, and Bangkok ,Thailand, as well”.

The BBC’s report does however go on to uncritically amplify to amplify Iranian regime messaging:

“News of the exchange first came on Wednesday in a statement on the website of the Young Journalist Club, a news website affiliated to state television in Iran.

“An Iranian businessman and two Iranian citizens who were detained abroad on baseless charges were exchanged for a dual national spy named Kylie Moore-Gilbert, who worked for the Zionist regime,” it said.”

Given the BBC’s previous record, one might have expected it to be more wary of providing credibility to that “businessman” claim. One would of course also expect a Western media organisation which claims to produce accurate and impartial news to refrain from promoting the unevidenced claim that Moore-Gilbert “worked for the Zionist regime”.

Remarkably though, while the BBC does find it appropriate to unnecessarily qualify the aim of the planned attack in which the three released Iranians were involved, it does not employ similar editorial policy when amplifying Iranian denials and false claims.

ANOTHER HIZBALLAH PLOT AGAINST ISRAELI TOURISTS GETS THE BBC SILENT TREATMENT