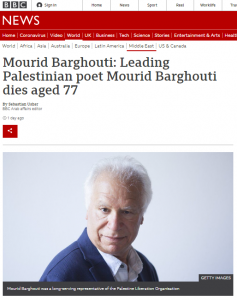 “Leading Palestinian poet Mourid Barghouti has died at the age of 77.

He was born four years before the state of Israel was created in a village near Ramallah. […]

Born in 1944, Barghouti was studying in the Egyptian capital Cairo when the 1967 Arab-Israeli war broke out.”

That account of course fails to explain to readers that in 1944 the village in which Barghouti was born (Deir Ghassaneh) was located in territory allocated to the creation of a national home for the Jewish people by the Mandate for Palestine. Neither does it clarify that the area was invaded and occupied by Jordan in 1948, that on June 5th 1967 the Israeli prime minister at the time informed the Jordanian king that “we shall not engage ourselves in any action against Jordan, unless Jordan attacks us” or that Jordan’s decision to ignore that appeal resulted in its losing control of the territory it had illegally held for nineteen years.

At the bottom of Usher’s article readers find a video by Paul Adams dating from October 2018 which was previously discussed here.

Additional items promoted in Usher’s report include a link titled “Viewpoint: I’m a Palestinian – but where am I from?” which leads to a BBC News website article dating from November 2011. Written by Mourid Barghouti, that article bemoans the fact that a country called Palestine is not an option on assorted websites and application forms.

“For years, the Facebook team has been reminding me that I have to edit my profile and add the country I come from. […]

Fed up with the dogged persistence of that dialogue box, I finally complied and clicked the “edit” button to write down “Palestine”. Oh, it was not as easy as I had thought. I am not allowed to type, I must select from an alphabetically prearranged list of countries.

The BBC knows full well that the Palestine in which Barghouti was born was not a country. Indeed, the BBC Academy style guide on Israel and the Palestinians has a whole section on that topic: 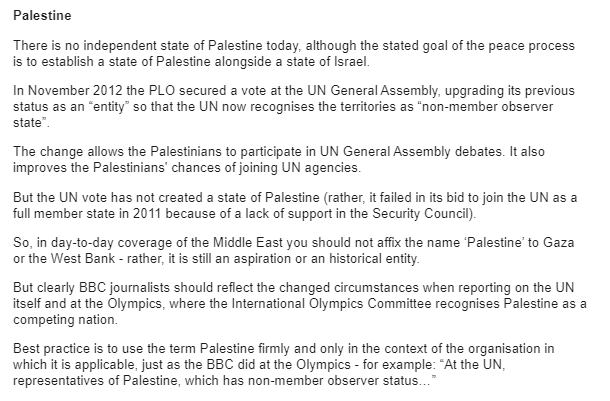 But as we see, while the BBC instructs its own journalists not to misinform audiences by referring to a country which does not currently exist, it is quite happy to publish – and even recycle a decade later – the ‘viewpoint’ of an outside contributor which intentionally misleads on that issue.