Prior to election day itself, BBC News website audiences saw one report in December 2020 and one article by Tom Bateman on March 22nd, an audio version of which was aired on BBC Radio 4’s ‘Today’ programme on the same day:

On the morning of March 23rd BBC Radio 4 ‘Today’ listeners heard a short report by the BBC Jerusalem bureau’s Yolande Knell in a news bulletin (from 2:06:15 here).

Listeners to the afternoon edition of the BBC World Service programme ‘Newshour’ heard a report by the Jerusalem bureau’s Tom Bateman (from 14:05 here) from a polling station in Tel Aviv and a filmed report from the same location was apparently aired on BBC television. 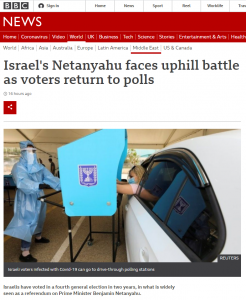 Visitors to the BBC News website on the morning of March 23rd found a report headlined “Israel’s Netanyahu faces uphill battle as voters return to polls”. In relation to the Coronavirus pandemic, that article misleads readers with the inaccurate claim that:

“At its peak, Israel was one of the worst-hit countries in the world, but more than half the population has now received at least one vaccination dose.” [emphasis added]

An amendment made to that report at around 19:58 UTC (21:58 local time) briefly informed readers of a rocket attack some three hours earlier on the southern city of Be’er Sheva while Netanyahu was visiting on the campaign trail:

“Later, a rocket fired by Palestinian militants in the Gaza Strip landed in an open field near Beersheba, a short while after Mr Netanyahu visited the southern city to rally his supporters.

There were no immediate reports of any casualties from the attack, and it was not clear whether the prime minister was in Beersheba when it happened. His Likud party said he had already left the city.”

Notably, that is the first mention of rocket attacks from the Gaza Strip that BBC audiences have seen this year with two earlier events in January having been ignored. 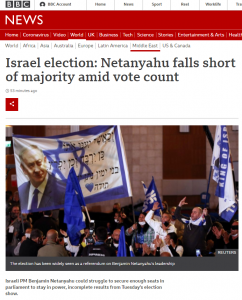 Some two hours later that article was replaced by one titled “Israel election: Netanyahu falls short of majority in exit polls” which makes no mention whatsoever of the fact that a missile was launched at a major city on election day from territory some 40 kms away which is controlled by a terrorist organisation.

Neither did that information appear in an item featuring the Jerusalem Post’s political correspondent Gil Hoffman which was aired on the evening edition of the BBC World Service radio programme ‘Newshour’ (from 14:06 here), although listeners did hear a stereotypical portrayal of Israelis from presenter Tim Franks:

Franks: “In Israel polls closed just a very short while ago in the fourth general election within two years. That’s partly down to the country’s notoriously fractious politics; indeed fractious population.”

Another interview with Gil Hoffman appeared in an item aired on BBC Radio 4’s ‘The World Tonight’ (from 23:16 here) along with a report by Tom Bateman from a Tel Aviv bar, another version of which was heard by listeners to BBC World Service radio’s ‘Global News Podcast’ (from 01:01 here) early on March 24th. Both those reports likewise failed to inform listeners of the earlier missile fire from the Gaza Strip.

One can of course only imagine what BBC coverage would have looked like if terrorists had launched a rocket during election day in any other country.