As we all too often have cause to note on these pages, the BBC Academy’s style guide on Israel and the Palestinians instructs the corporation’s journalists to refrain from using the term Palestine other than in very specific circumstances. 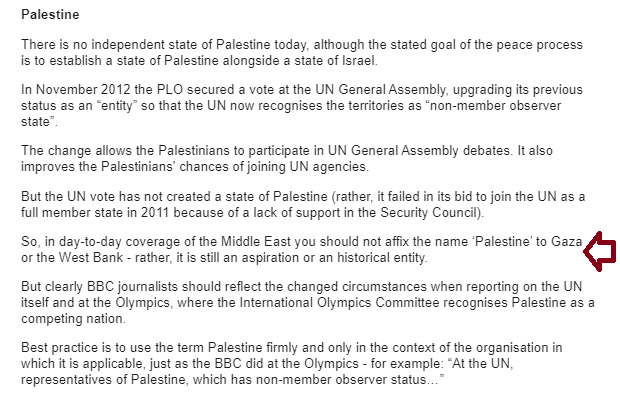 That instruction was again ignored last week when ‘Bitesize’ – the BBC’s educational website for British pupils aged 4 to 14 – slightly amended an article first published in April 2020 under the title “Things you might not know about Passover”.

“As the Sun [sic] sets on 27 March, Jewish people around the world will begin celebrations for the festival of Passover.

Passover marks the exit of the Jewish people from Egypt, where they were enslaved, as told in the Old Testament. This is known as the Exodus. You might remember this crucial biblical story, or its Hollywood renditions – but do fruit paste, oranges and cleaning scream ‘Passover’ to you? No? Then read on!” [emphasis added]

The final section of that explainer tells its target audience of juvenile British readers (most of whom will not be familiar with Jewish culture in their own country) that:

“In recent years, some groups have included more contemporary symbols in their seder plates.

Some will use an orange to show solidarity with female empowerment and the LGBT community. In some cases, the spitting out of pips after those at the feast have eaten an orange segment, is an allusion to ejecting homophobia from within.

Olives are also appearing to promote peace between Israel and Palestine, and artichokes are making an appearance where families are a blend of faiths. Pinecones have also been used to show sympathy towards prisoners as the pine nut within, seen here as the human soul, is treasured but difficult to reach beyond the protective spokes of the cone.” [emphasis added]

That section is illustrated using a photograph with a replacement caption that has been altered to likewise include the term Palestine. 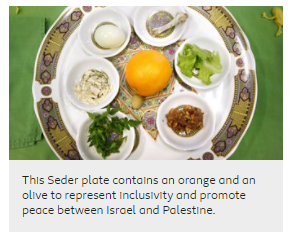 The BBC’s young audiences are not informed who “some groups” are, whether or not they represent any significant proportion of the British Jewish community or how prevalent any such reinterpretations of a central part of a festival that the BBC itself has noted that Jews have celebrated for thousands of years actually are.

‘Bitesize’ has previously produced a reasonable backgrounder explaining Pessah to British children and another BBC department catering for young audiences, Newsround, published appropriate content on March 27th of this year.

However as we see, ‘Bitesize’ has chosen to ignore the corporation’s own style guide for a second time in order to shoehorn a trite and gratuitous reference to Middle East politics into an item supposedly explaining to children in the United Kingdom the meaning of the festival their British Jewish classmates and neighbours (who of course have no connection to the issue of “peace between Israel and Palestine”) are celebrating.