BBC Radio Wales describes its weekly programme ‘All Things Considered” as a “[r]eligious affairs programme, tackling the thornier issues of the day in a thought-provoking manner”.

The March 13th edition of that programme was titled ‘Purim’. 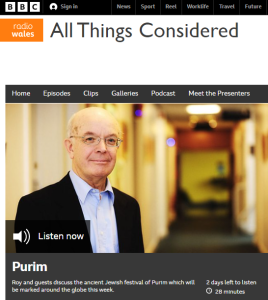 “The ancient festival of Purim will be marked around the globe this week. What is it? What’s its significance for Jewish people in a dangerous world? And what does it mean among the diminishing communities of Jewish people in Wales? Joining Roy Jenkins to discuss the issues are Rebbetzin Aidele Rose, of Cardiff United Synagogue, Reform Rabbi Dan Cohn-Sherbok, Professor Emeritus of Judaism at the University of Wales, Professor Nathan Abrams, Professor of Film at Bangor University and part of the North Wales Jewish community, and friends, Judy, Truda and Claire.”

Listeners who may have pondered quite how the Jewish holiday of Purim fits into the category of “thornier issues of the day” (along with the question of why presenter Roy Jenkins consistently mispronounced the name of that festival throughout the entire 28-minute programme) had only to wait until the section beginning 18:34 minutes in when Jenkins and one of his guests managed to shoehorn Palestinians into the discussion.

Dan Cohn-Sherbok: “It’s not just the story of Purim. We’re talking about Purim but it’s connected to other aspects of Jewish life and Jewish festivals. The festival of Hannuka is the same; it’s a story about threats and survival. And that’s really at the heart of Jewish life. We are aware as a people that we have been around for literally thousands of years; nearly three thousand years. At the time of the exodus, thousands and thousands of years ago, we were threatened with extinction. And we have always been threatened by extinction and yet here we are. We have survived. It runs in our blood and if you ask about the contemporary significance, it underlies the creation of the State of Israel. The State of Israel is a response to antisemitism. Jews who were Zionists at the end of the nineteenth century feared that without a country of our own we would never survive and that the solution to the problem of antisemitism was to have a country where we could be secure and we could defend ourselves. And no matter how secure we feel in other countries – and this is true everywhere – we are conscious of this potential threat. People hate us. It is the longest hatred of humanity: hating the Jews. And it runs in our blood. We are frightened and we need to defend ourselves and this story crystalises the idea that we can survive and that God is on our side and that we will survive into the future.”

Roy Jenkins: “Some people of course would look at the present State of Israel and say well actually they’ve gone back to some of their less pleasant roots and they certainly aren’t treating people in the way they should.”

Cohn-Sherbok: “Yes, certainly there is criticism of Israel. I think that the State of Israel was founded on the assumption that Jews needed to protect themselves. But the historical circumstances were such that the Palestinians suffered. The residents of what was Palestine – now Israel – have really suffered and many Jews are very sympathetic. I’m very sympathetic about the plight of Palestinians. I’ve written books about this and I’ve written a book with a Palestinian and we debated the issues. So there is within the Jewish world sympathy for those who suffer. We don’t want others to suffer as we’ve suffered. But it’s so problematic – the creation of the State of Israel – because it’s in the place it is. So I…I…you mustn’t think that Jews are not sympathetic to the plight of the Palestinians. Many of us are. Many of us want to see a two-state solution. I want to see a two-state solution. I think it’s the only way. But it is very fraught. There’s such hatred, such enmity, on both sides: on the Jewish side and the Arab Palestinian side. It’s a problem that hasn’t been resolved.”

While this section of the programme clearly contributed little to audience understanding of the festival of Purim and its meaning for the tiny Welsh Jewish community, the producers chose to include it anyway. What listeners heard were trite talking points promoting a dumbed-down, one-sided narrative on a complex topic unrelated to the programme’s declared subject matter along with an unexplained reference to Israeli Jews and “their less pleasant roots” which surely requires explanation from Jenkins.

CAMERA UK has written to BBC Radio Wales requesting clarification of the use of that phrase and the gratuitous insertion of Palestinians into a programme supposedly about a Jewish festival.

BBC RADIO WALES ON THE BALFOUR DECLARATION – PART ONE