Following his March 31stpromotion of a conspiracy theory from ‘Electronic Intifada’ involving “Israeli lobbyists” (which in fact targeted Jewish students and their UK allies), it would appear that the BBC had a word with BBC Arabic anchor, Nour Eddine Zorgui. On Tuesday, April 13th  the Jewish Chronicle reported that:

“In response to the JC, a BBC spokesperson said: ‘The tweets have been removed and our journalist reminded of the BBC social media guidelines’”.

The same response was sent to others who submitted complaints; for example here.

However, by Tuesday night, the anchor had dubbed CAMERA Arabic “cheap propaganda” and blocked our Twitter account (screenshot of his short-lived tweet below). How did that happen?

Nour Eddine Zorgui, shortly after being called out for sharing a post by ‘Electronic Intifada’: CAMERA Arabic’s Twitter page engages in “cheap propaganda”

During Monday’s social media remake Zorgui also amended another Facebook post from more than two years ago and deleted its corresponding tweet. In both, he had originally described his location at the time as “in Palestine” although he was actually broadcasting from west Jerusalem and visiting the Israeli city of Nazareth.

Although CAMERA Arabic contacted the BBC at the time, that complaint was ignored. Only after the Jewish Chronicle revisited the matter did Zorgui edit his Facebook post to say “in Jerusalem” instead of “in Palestine”: 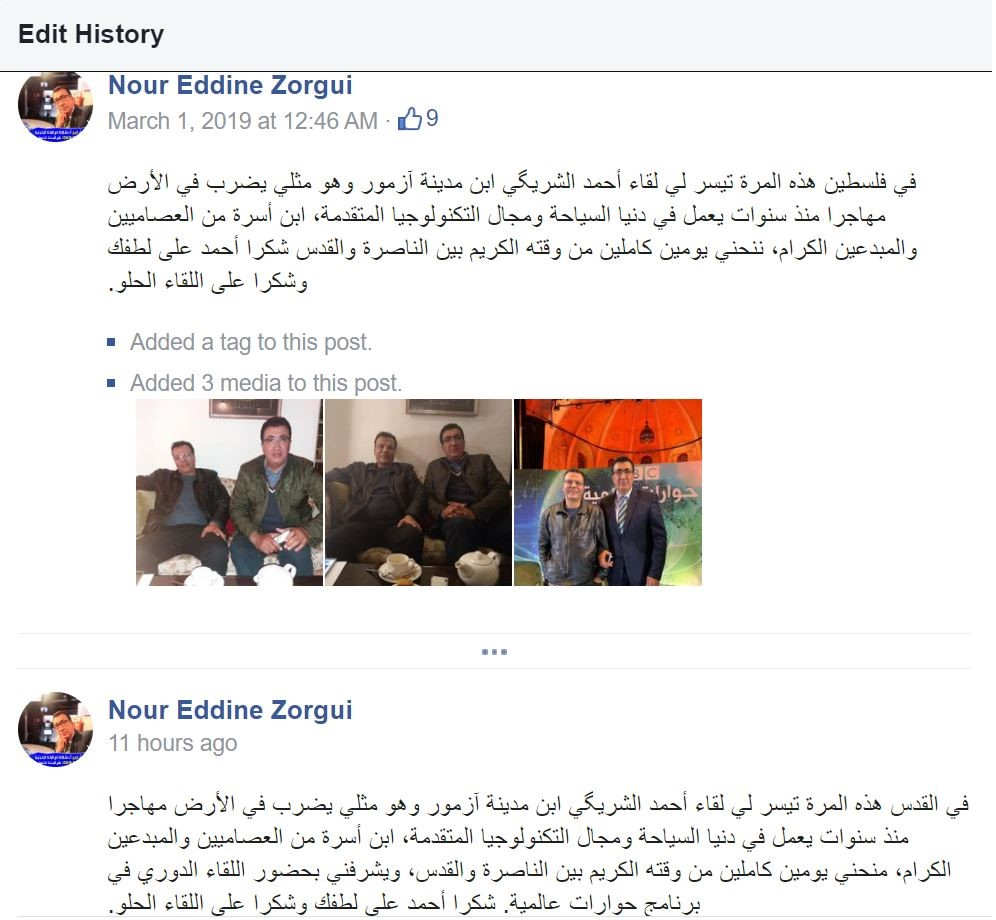 According to the Jewish Chronicle:

“A BBC spokesperson said: ‘Our journalist stated his location incorrectly in this post. It has now been corrected’”.

However, the BBC spokesperson did not mention the fact that a complaint on that matter had been submitted in real time but was not addressed for over two years.

CAMERA Arabic then thanked BBC Arabic and Zorgui for the belated “Palestine” to “Jerusalem” change via our Twitter account, adding “better late then never”. We also expressed our hope that, having corrected “Palestine” to “Jerusalem”, by next year Zorgui and BBC Arabic would be able remember the name of the country in which their Jerusalem studio is located. A map clearly showing it was in west Jerusalem, i.e. within Israel’s internationally recognized borders, was attached.

At that point Zorgui chose to respond to our first tweet from 2019, which asked whether BBC Arabic takes seriously the corporation’s own guidelines concerning social media activity of employees. Adding the 2019 Jerusalem broadcast he was hosting as a video attachment, Zorgui wrote us: “Oh, it does alright [Iit. ‘It takes it and a half’]”. 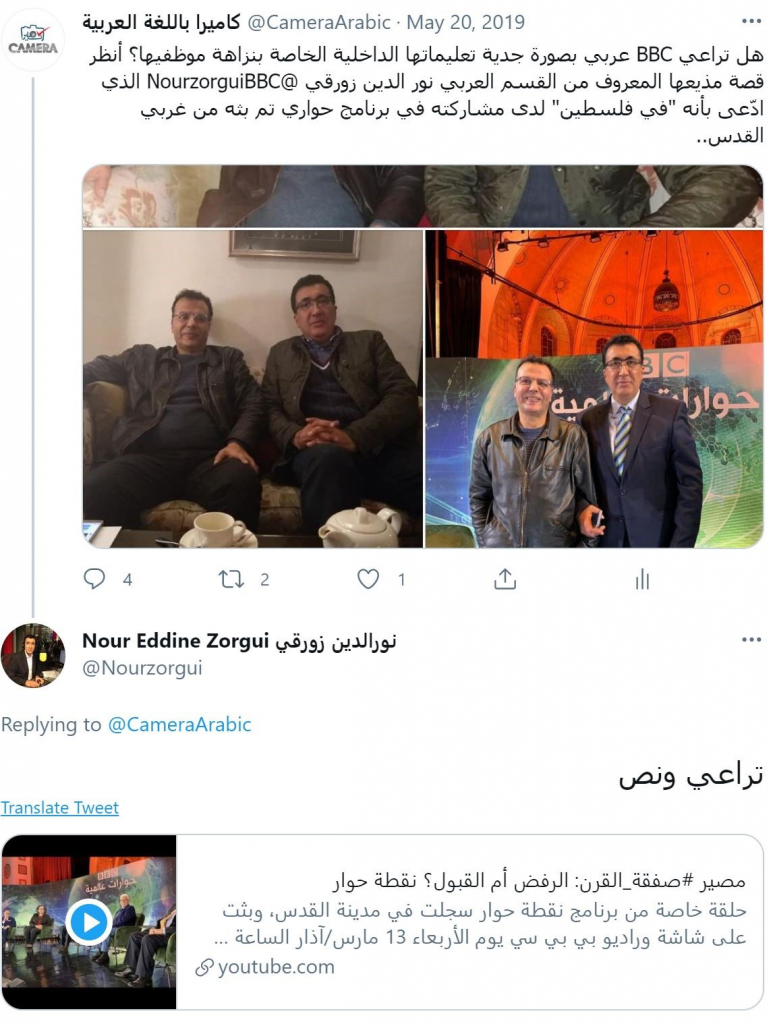 When we asked, “Did you mean, ‘oh, it does alright (but only after two years)’?”,Zorgui responded: “I meant, watch the program and what was said there so you verify the cheap propaganda your webpage engages in”. He then blocked CAMERA Arabic’s twitter account and deleted both his CAMERA Arabic-related comments a few hours later. 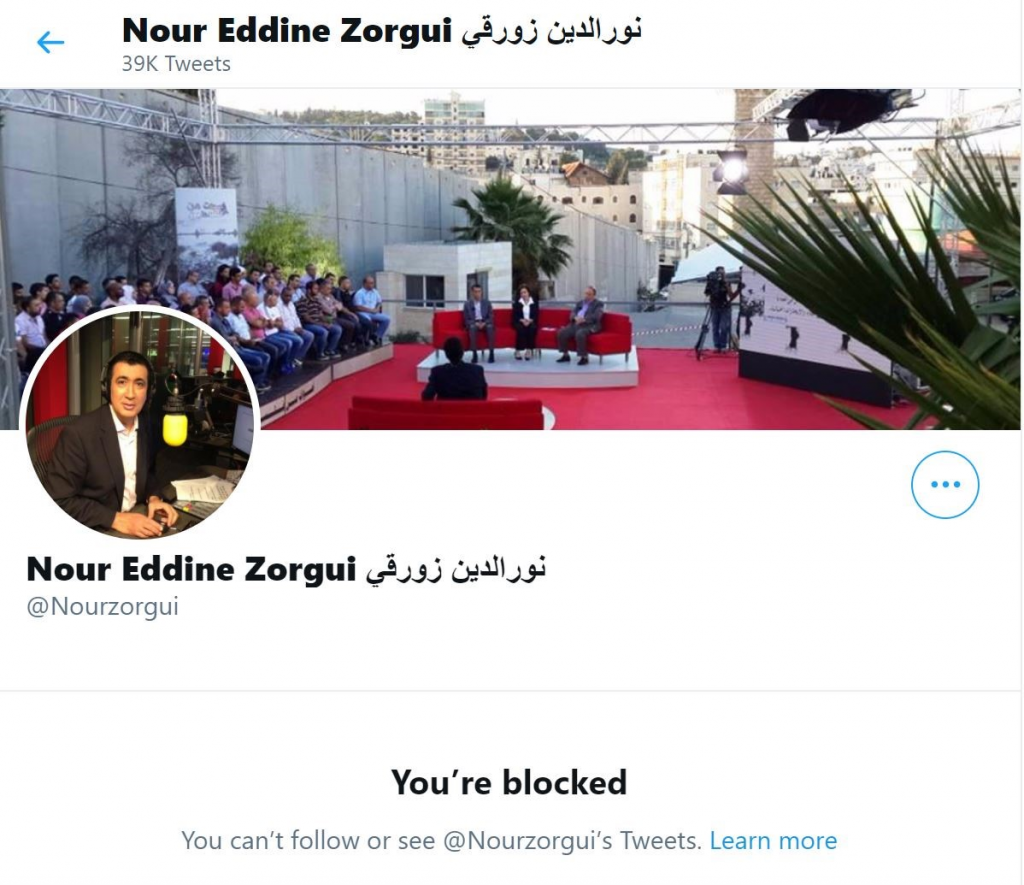 Irrelevant as Zorgui’s remarks were to the argument we made (not the first of its kind either, it seems), his suggestion to “watch the program” nevertheless warrants a response. In fact, not only did CAMERA Arabic staff members watch the program, one of our contributors was present in the audience when it was recorded. The contributor can confirm once more that at the February 28th, 2019 event itself, Zorgui made public remarks referring to the city and country he was in as “Jerusalem” and “Palestine” prior to the commencement of recording.

The BBC has had editorial guidelines relating to employees’ use of social media for over a decade and, as noted by the Jewish Chronicle report, recently that topic has been in the spotlight again in relation to impartiality.

“Last October, BBC Director General Tim Davie introduced new guidance on social media usage, designed to force staff to maintain impartiality. It requires BBC employees and presenters not to express a personal opinion on matters of public policy, politics or controversial subjects. The guidance says bias can be shown through follows, likes, retweeting or other forms of sharing. The news rules are particularly aimed at “staff in news, current affairs, factual journalism and… presenters who have a significant public profile”.”

As this latest incident shows, such long-standing editorial guidelines did not prevent a Facebook post to which the BBC had been alerted at the time from remaining in situ for over two years.

BBC ARABIC HOST OF JERUSALEM SHOW CLAIMS TO BE ‘IN PALESTINE’