A rocket launched from the Gaza Strip at the Sderot district just as Israel’s April 15th Independence Day celebrations were coming to an end did not receive any English language coverage from the BBC even though at least one locally based member of the corporation’s staff was aware of both that attack and another one the following evening that likewise went unreported.

In contrast, visitors to the BBC Arabic website on April 16th found a report by BBC Trending headlined “Tweeters: “The UAE congratulates Israel on the anniversary of its independence while Gaza is under bombardment”” in which they were told that: 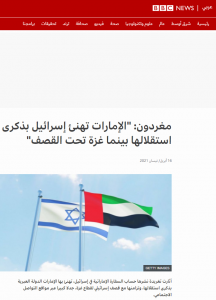 “…many [Twitter users] interacted with the Israeli bombing of several areas in the Gaza Strip, which, according to the Israeli narrative, came in response to the launch of a missile from the Strip.” [emphasis added]

The first part of that report relates to reactions to a Tweet sent by the UAE embassy in Israel on Independence Day.

“A tweet posted on the account of the Emirati embassy in Israel, in which the UAE congratulates the Hebrew state on the anniversary of its independence, and coincided with the Israeli bombing of the Gaza Strip, sparked great controversy on social media.

The tweet read: “The Embassy of the United Arab Emirates in Israel wishes the citizens of the State of Israel a Happy Independence Day!””

Almost all of the non-Israeli comments presented in the BBC’s report condemned that tweet. CAMERA Arabic notes that this was indeed the dominant voice amongst Arab Twitter users, who generally viewed the Emirati message of friendship as allegedly betraying the Palestinian cause.

However, although the BBC Arabic report mentioned other commentators who viewed the tweet as just “a diplomatic custom one is required to follow”, it completely omitted comments written by the sizeable minority of Arab Twitter users who wholeheartedly joined the Emirati embassy in congratulating Israel, thus raising the question of why those voices were ignored in an item supposedly presenting different opinions. 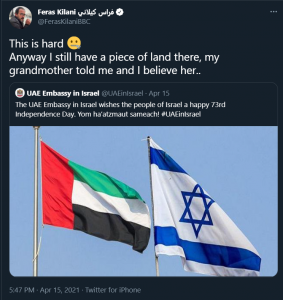 Kilani was born in 1976 in Syria and has been a British citizen since 2015. Nevertheless he still presents himself a “Palestinian refugee”, describing himself and his family as “looking forward to return” to what has been Israel for 73 years. 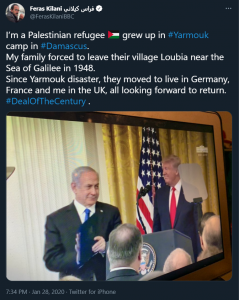 These restrictions safeguard the BBC’s impartiality and protect individuals involved, who may face accusations of bias.”

“15.3.13 Where individuals identify themselves as being linked with the BBC, or are programme makers, editorial staff, reporters or presenters primarily associated with the BBC, their public expressions of opinion have the potential to compromise the BBC’s impartiality and to damage its reputation. This includes the use of social media and writing letters to the press. Opinions expressed on social media are put into the public domain, can be shared and are searchable. 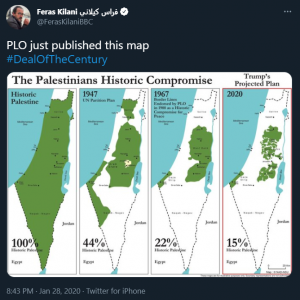 The risk is greater where the public expressions of opinion overlap with the area of the individual’s work.”

Three years ago the BBC sent Kilani to make a filmed report about ‘Nakba Day’ and to report from the Gaza Strip on the ‘Great Return March’.

In light of his more recent social media activity it should of course be amply clear to the BBC that Kilani is by no means an impartial observer of events in or involving Israel.