In recent years we have documented the BBC’s amplification of anti-Israel campaigns involving or run by the controversial political NGO ‘Human Rights Watch’ (HRW), including the FIFA campaign, the Airbnb campaign and the UN BDS data base campaign. 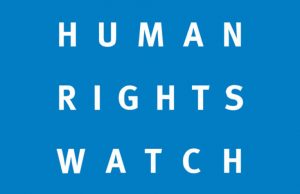 Readers may also recall the BBC’s very generous yet one-sided coverage of the 2018/19 story of the non-renewal of the work visa of HRW employee Omar Shakir by Israel due to his BDS-supporting activities.

Time and time again we have documented the fact that, despite HRW being one of the political NGOs most quoted and promoted in BBC content relating to Israel, the corporation has repeatedly failed to meet its own editorial guidelines on impartiality by neglecting to inform audiences of Human Rights Watch’s “affiliations, funding and particular viewpoints”.

It therefore came as no surprise to see that on the day – April 27th – that HRW released its latest anti-Israel report (discussed here), the BBC – having apparently received an advance copy/copies – was quick off the mark to provide a platform for the accompanying PR campaign.

Newsreader: “The campaign group Human Rights Watch says Israel’s treatment of Arabs in the Palestinian territories and within its own borders now amounts to apartheid and persecution. In a new report the organization has urged the international community to re-evaluate its relationship with Israel and calls on the UN to set up a commission to investigate crimes against humanity in the region. Israel has rejected the conclusions as false propaganda. Here’s our Middle East editor Jeremy Bowen.”

Bowen: “The actions condemned by Human Rights Watch are well-documented. They include restricting the movement of Palestinians, confiscating land and controlling settlement and demography in favour of Jews. The question is whether they amount to apartheid and persecution. Israel has justified what it’s done on security grounds. It claims rights to the land it’s occupied since the 1967 Middle East war on which it’s settled hundreds of thousands of Jews. In a detailed 200 page report Human Rights Watch said that Israel has systematically oppressed Palestinians to benefit Jewish Israelis. It says Israel’s actions breach an international convention which states that apartheid is a crime against humanity. The Israeli foreign ministry rejected the report as preposterous and false propaganda.”

A serious news organisation would of course give listeners some idea of the agenda and record of a “campaign group” whose claims it elected to amplify. That was not the case either in that news bulletin or in the subsequent eight-minute item (from 2:40:55 here) which began with an interview with the report’s “lead researcher” Omar Shakir.

Presenter Mishal Husain ignored BBC editorial guidelines concerning “contributor’s affiliations”, describing HRW only as a “campaign group” and making no mention of Shakir’s record on Israel and his BDS activities. [emphasis in italics in the original, emphasis in bold added]

Husain: “The campaign group Human Rights Watch has published a dossier which it says shows the Israeli government privileges Jewish Israelis while repressing Palestinians to the extent that it is committing crimes against humanity of apartheid and persecution. Omar Shakir is the organisation’s Israel and Palestine director. […] What are the policies that you cite to back up this view?”

Shakir: “We studied Israeli policy planning documents, statements by officials. We conducted case studies across Israel and Palestine [sic] and we show the way in which demographics – in particular the desire for demographic control by Jewish Israelis as well as policies to maximise the land available to Jewish Israelis and confine Palestinians to enclave [sic] across Israel and the occupied territory – underlies Israeli policy throughout these areas and when combined with the systematic oppression and inhumane acts committed against Palestinians in the occupied territory, amount to the crimes against humanity apartheid and persecution.”

Husain: “OK. Can you just spell out exactly what you mean. What is the difference in treatment because apartheid is a very powerful term with a very important history.”

Husain refrained from providing listeners with the context of twenty years’ use of that “very powerful term” in anti-Israel campaigning.

Shakir: “Of course and while apartheid it was coined in relation to the repulsive practices in South Africa, it is now a universal legal term and it is a crime against humanity defined in the Rome Statute of the International Criminal Court. And it consists of grave abuses, called inhumane acts, carried out with the intent of one group to dominate the other amidst systematic oppression. Human Rights Watch found those elements come together in the occupied territory pursuant to a single Israeli government policy across these areas to maintain the domination by Jewish Israelis over Palestinians.”

Husain: “Such as? What are the manifestations of that policy?”

Husain made no effort whatsoever to challenge any of those politically motivated claims from Shakir for the benefit of listeners. She made no attempt to clarify that Areas A and B are controlled by the Palestinian Authority that Shakir avoided mentioning at all or that the Gaza Strip (which also has a border crossing with Egypt) is ruled by the terrorist organisation Hamas. She failed even to note that 93% of eligible Palestinian voters – some 2.6 million people – have registered to vote in the election scheduled for next month for members of the Palestinian parliament and to ask Shakir whether he believes – as seems to be the case from his words – that those people should also have the right to vote in Israeli elections.

Husain: “We’re gonna hear an Israeli perspective in a moment…ahm…but where do you imagine this goes, given that Israel is not a member of the International Criminal Court?”

Shakir: “Well we start by calling a spade a spade. For years prominent voices have warned that apartheid was just around the corner. The reality here is Israeli officials have turned that corner. The threshold has been crossed and apartheid is a reality today for millions of Palestinians and the world must recognise that reality for what it is. You can’t solve a problem when you misdiagnose it. The diagnosis here is apartheid, persecution and urgent steps are needed to end that reality.”

Husain failed to enquire when exactly Shakir thinks that “corner” was turned or why he claims that the situation now is any different than in previous years.

Husain: “You didn’t share this report with – for comment – with any Israeli authority the ministry of foreign affairs has said, which is why they accuse you of having an anti-Israel agenda.”

Shakir claimed that HRW had written to the Israeli government in July 2020 and “last week” to the prime minister’s office but “they never responded”.

Had Husain bothered to adhere to BBC editorial guidelines at the beginning of the item and given audiences a clear view of Human Rights Watch’s record on Israel and its political agenda, listeners would of course have better understood Israel’s reaction to this latest in a long line of monotone HRW ‘reports’.

Husain then introduced Professor Gerald Steinberg of NGO Monitor (from 2:44:53) who, among other points noted HRW’s failure to include the component of Palestinian terrorism in its report.

One of Husain’s ‘questions’ was as follows: 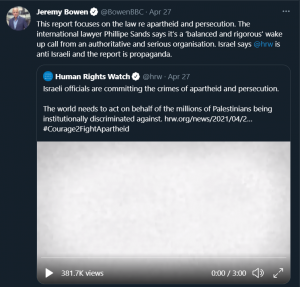 Husain: “The international…the international lawyer Philippe Sands – who is himself Jewish – has said that this report is a balanced and rigorous wake-up call by a serious and authoritative organisation.”

The BBC would of course do well to explain to its audiences why Mishal Husain apparently thinks that Mr Sands’ ethnicity has relevance to his opinions as a lawyer.

In this item we see once again that when promoting campaigns by ‘Human Rights Watch’ the BBC tosses editorial standards on impartiality aside, failing to provide its audiences with the full range of information concerning that organisation’s long-standing anti-Israel stance that are necessary for proper understanding of the story.

THE GUARDIAN AND HRW: ALLIES IN THE DEMONISATION OF ISRAEL

THE TIMES CORRECTS ON ‘APARTHEID’ DEFINITION