Earlier we discussed a BBC News website report about violence in Jerusalem published on the morning of May 8th.

Three additional reports on the same topic subsequently appeared on the BBC News website’s ‘Middle East’ page, recycling many of the problematic themes seen in that first article:

a) May 9th: “Jerusalem: Many injured on second night of clashes”

b) May 9th: “Jerusalem protests: Netanyahu defends Israeli action after clashes with Palestinians”

As was the case in the initial report, all three of the subsequent ones promote the notion that the reason for the violence is potential evictions of Palestinians from property in the Sheikh Jarrah neighbourhood. [emphasis in bold added] 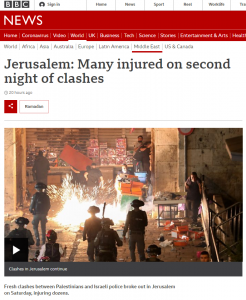 “It follows days of simmering unrest over possible evictions of Palestinians from land claimed by Jewish settlers. […]

Tensions have been rising over the threatened eviction of Palestinian families in East Jerusalem’s Shaikh Jarrah district.

The UN says Israel should call off any evictions and employ “maximum restraint in the use of force” against protesters.

The League of Arab States has called on the international community to intervene to prevent any forced evictions.

Israel’s Supreme Court is expected to hold a hearing on the long-running legal case on Monday.”

The BBC’s use of the phrase “claimed by Jewish settlers” misleads readers by failing to clarify that the legal status of the property was determined in court years ago. The use of the phrase “Israel should call off any evictions” is likewise misleading because – as pointed out by Professor Avi Bell – “It is private parties, rather than the government of Israel, that have brought their claims to court”. 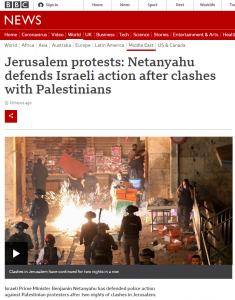 “The clashes follow a month of tensions, with the threatened eviction of Palestinian families a focal point.

The latest came on the eve of an expected hearing in the Israeli Supreme Court of the years-long case of the families, comprising more than 70 people, appealing against an eviction order in favour of a Jewish settler organisation in East Jerusalem’s Sheikh Jarrah district.

But the hearing was cancelled on Sunday following a request from Israel’s attorney-general. A new date will be set in the next 30 days. […]

Amid an already febrile atmosphere, Palestinians have been rallying round the cause of four Palestinian families facing eviction in Sheikh Jarrah after Israeli courts ruled the land belonged to a Jewish settler organisation in a long-running and bitter legal case.

Israel’s Supreme Court was due to hear the appeal of the families, who could be forcibly removed from the properties, a prospect which has caused an international outcry. The district had seen nightly violence between police and Palestinians ahead of the expected decision. Palestinian militant groups have warned of retaliation if the families are forced out.”

The BBC did not bother to clarify that what it euphemistically terms “militant groups” are in fact the terrorist organisations Hamas and Islamic Jihad. 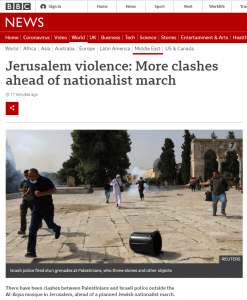 “The latest violence follows a month of tensions, with the threatened eviction of Palestinian families a focal point.

Israel’s Supreme Court had been due to hold a hearing on Monday in the appeal of more than 70 people against an eviction order in favour of a Jewish settler organisation in East Jerusalem’s Sheikh Jarrah district, but the session was postponed due to the unrest.”

Once again we see that the BBC made no effort to inform audiences of the obviously relevant history behind the Sheikh Jarrah story – in particular the fact that the land in question was purchased by Jews in 1875. Neither are BBC audiences told that the issue of evictions arose because the Palestinian tenants refused to pay rent for the properties in which they resided as tenants and their leases have expired. Readers of these three reports are not adequately informed as to how the long-running Sheikh Jarrah story has been exploited by various Palestinian factions for their own political purposes.

In all three of these reports readers once again find references to “the Al Aqsa mosque complex” in breach of the corporation’s style guide which defines the correct term as Haram al-Sharif.

“Jerusalem’s Al-Aqsa mosque complex is one of Islam’s most revered sites, but its location is also the holiest site in Judaism, known as the Temple Mount. The complex is a frequent flashpoint for violence, but Friday’s was among the worst in years.”

“The two nights of clashes took place around Jerusalem’s Al-Aqsa Mosque complex, a frequent flashpoint for violence. It is one of Islam’s most revered sites, but its location is also the holiest site in Judaism, known as the Temple Mount.”

“Clashes broke out on at the Al-Aqsa mosque complex, one of Islam’s most revered locations. It is also the holiest site in Judaism, known as the Temple Mount.”

As noted here in the past, the use of the term “Al-Aqsa mosque complex” or “compound” was recommended to foreign journalists in 2014 by the PLO.

All three reports adopt the long-standing BBC practice of omitting relevant history prior to June 1967, including Jordan’s belligerent invasion and 19-year-long illegal occupation of parts of Jerusalem, which is particularly relevant to the topic of the properties in Sheikh Jarrah.

“The fate of East Jerusalem goes to the heart of the Israel-Palestinian conflict, with both sides claiming the right to it. Israel effectively annexed East Jerusalem in 1980, in a move not recognised by the vast majority of the international community, and considers the entire city its capital.

The absence of that relevant historical background is particularly glaring in article c) where readers are told that:

“There are fears of more violence on Monday over the annual Jerusalem Day Flag March.

The event marks Israel’s capture of East Jerusalem – home to the Old City and its holy sites – in 1967, and usually sees young Zionists walk through Muslim areas.”

Jerusalem Day of course marks the reunification of the city after the 19 years of Jordanian occupation that the BBC carefully avoids mentioning.

In article a) readers are told that:

“Earlier on Saturday, Israeli police had stopped dozens of buses carrying worshippers to the mosque, and a number of Palestinians were arrested after Friday’s violence.

While the BBC chose to uncritically amplify that canard concerning prayer, it did not bother to inform readers that:

“Police said they stopped the buses because they had intelligence indicating some of the passengers were planning to riot on the Temple Mount. They said only “suspicious” passengers would be forced off, while others would be allowed to drive on. The blockages were eventually opened up after some three hours.”

“In a separate development on Saturday, Israel’s military said a rocket was fired by Palestinian militants from the Hamas-run Gaza Strip into Israel.”

The two later reports failed to mention that additional rocket attacks took place on the evening of May 9th and the morning of May 10th.

In article c) readers are told that:

“Confrontations between Palestinians and Israelis were also reported in the northern Israeli city of Haifa, and near the West Bank city of Ramallah.”

However no mention is made of the fact that on May 9th no fewer than 39 fires on agricultural land and a nature reserve in south-west Israel were cause by balloon-borne incendiary devices launched from the Gaza Strip and that such attacks had been launched on previous days too. 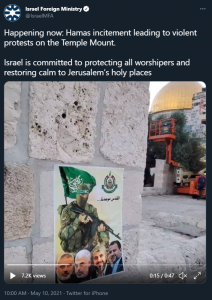 While all strongly playing into the Palestinian narrative concerning the dispute in Sheikh Jarrah, none of the four BBC reports published so far has made any effort to explain to audiences how and why Hamas, other terror groups, the PA and interested parties are trying to escalate tensions in Jerusalem and elsewhere. Rather than provide BBC audiences with an accurate and objective view of events and their background, the BBC has to date produced four reports all promoting the same one-sided narrative.