Although it has now been reporting intensively on the topic for a month, the BBC has yet to provide its audiences with a full and objective account of the Sheikh Jarrah property dispute – and not least the fact that the people now facing the possibility of eviction could have avoided that situation had they stuck to their side of an agreement reached nearly 4 decades ago.

The problem here is that the tenants never paid rent and they had engaged in a range of different violations of leases. Four of the eight defendants in this case were children and grandchildren of the tenants who never paid rent (nor abided by the terms of the lease). The others simply squatted on the land. So, unsurprisingly, when the latest round of litigation had commenced, the owners were able to win eviction orders.”

In a report published on the BBC News website on the evening of June 6th under the headline ‘Israel arrests Palestinian activist Muna el-Kurd in East Jerusalem’, readers were told that: 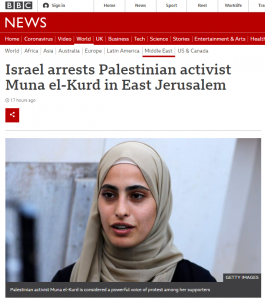 “Tensions in Sheikh Jarrah played a role in recent fighting between Israel and the militant group Hamas. […]

From the property, she [Muna el-Kurd] and her brother Mohammed have used social media to bring the issue of the potential forced eviction of several Palestinian families to international attention. The families include her own, which has lived in East Jerusalem for decades.

They face eviction after Israeli courts ruled that the land belonged to a Jewish settler organisation in a long-running and bitter legal case. The case has moved on to Israel’s Supreme Court, which allows the families to appeal.”

In other words, once again the BBC avoided providing its audiences with the full background to that long-running story concerning property in the Sheikh Jarrah/Shimon HaTsadik neighbourhood of Jerusalem.

The question of why BBC audiences have not been provided with a proper explanation of that story – and why not one BBC journalist has yet asked those Sheikh Jarrah residents why they failed to uphold their side of that 1982 agreement – is perhaps easier to answer in light of some recent comments from the BBC Jerusalem bureau’s Tom Bateman who has been covering the story for some time.

Although the BBC did not bother to report it, the Hamas terrorist organisation called for a ‘Day of Rage’ on Friday June 4th. On that day, Palestinian activists organised a two-mile protest run in Jerusalem from Sheikh Jarrah to Silwan which ended in a rally that the police dispersed as rocks and chairs were thrown at them. That context (along with the fact that the claim concerning a rubber bullet came from the Palestinian Red Crescent, as clarified in Hebrew by the Ha’aretz reporter whose Tweet Bateman used) was absent from a Tweet put out by Bateman in which he promoted the claim that:

Bateman did not provide evidence to support any part of that allegation. 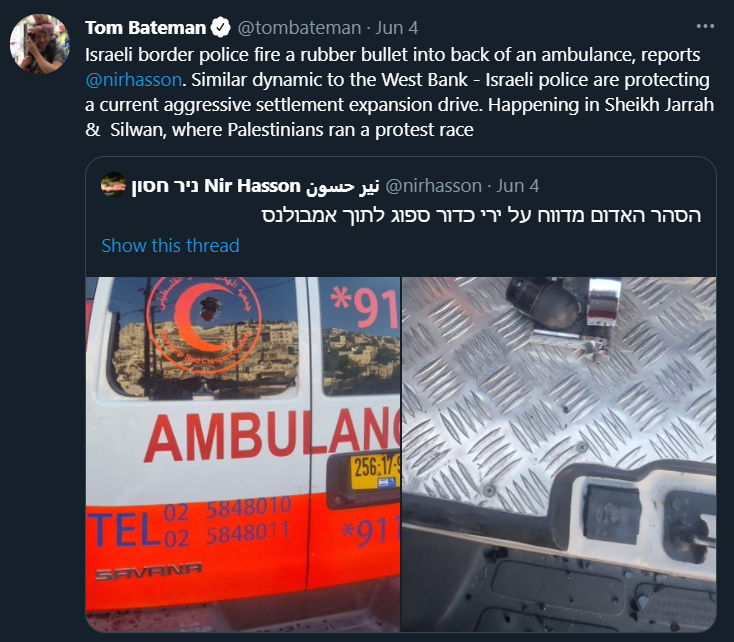 The June 6th report on the arrest of the el-Kurd twins includes ‘analysis’ from Bateman in which – as he also did in a Tweet – he editorialised on the topic of police activity.

“As he spoke his daughter was suddenly escorted out of the police station – causing Palestinians and the press to move towards her.

Israeli police then fired at volley of stun grenades, despite the peaceful nature of the event. I saw a Palestinian man later carried into an ambulance.

It felt like a further needless escalation ahead of this week’s potential rise in tensions again in Jerusalem, with a planned march by Israeli religious nationalists through the Muslim Quarter of East Jerusalem’s Old City.” [emphasis added]

In the June 6th edition of the BBC World Service’s ‘Global News Podcast’ listeners heard Bateman report on the same story (from 01:27 here), including the following: 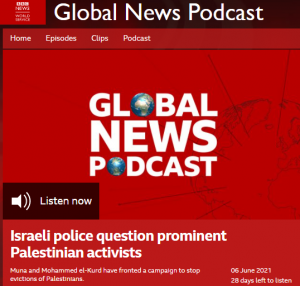 “I was outside the police station, ahm, actually as she [el-Kurd] was brought out at the moment, at the very same time her father was giving a sort of impromptu press conference under the shade of a tree. The press and Palestinians gathered there who support the family moved towards the police car she was being taken to and then suddenly a volley of stun grenades from the Israeli border police. I mean I couldn’t see any reason for it. Perhaps there was out of sight but I certainly couldn’t see anything. This was basically a peaceful event and it seems to be a really needless provocation.”

An impartial journalist would have requested a police statement on the matter before publicising personal judgements on a situation he admits he may have failed to understand.

“I mean as for the Israelis, they’ve always tried to sort of say this is a private housing dispute but of course it goes much, much further than that and has taken on a much wider relevance in terms of the conflict.”

The reason for that “wider relevance” is that some members of the media – the BBC included – long since self-conscripted to the broader political campaign concerning “settlements” that currently exploits the Sheikh Jarrah property dispute to advance its cause and which was recently co-opted by Hamas for its own ends.

The presentation of the story to BBC audiences over the past month has clearly not been intended to enhance their knowledge of that legal case and so it whitewashes the central fact that those residents compromised their status as protected tenants by not paying rent for 39 years and have also previously rejected a proposal by Israel’s Supreme Court “that the state expropriate the contested houses and declare those living there as protected residents”.

Rather, the monotone framing of the Sheikh Jarrah story is intended to comply to and advance a politically motivated narrative which the BBC adopted long ago.