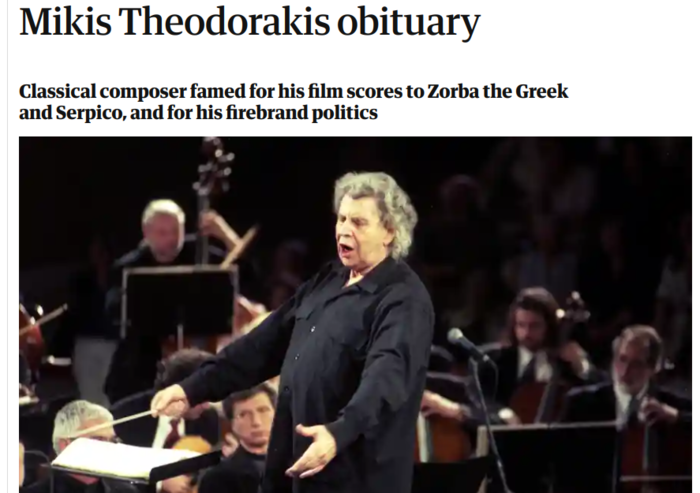 Unlike the Guardian, an obituary in The Times devoted two paragraphs (in a much shorter piece) to Theodorakis’s anti-Jewish racism.

Though the Guardian obit for the Greek composer, best known writing the score to ‘Zorba the Greek‘, included great detail on his political activism, including his opposition to Greece’s military junta, it didn’t report that he was a self-proclaimed anti-Semite and – as the Guardian itself reported in 2003 – called Jews the “the root of all evil”.  Additionally, he accused Jews of controlling “world music”, the banks, the media and the United States.

Theodorakis also alleged that Israeli policies towards the Palestinians were like that of the Nazis.

In contrast to their treatment of Theodorakis, a recent Guardian obituary for American Jewish comedian Jackie Mason informed readers that he teetered “on the edge of racism” and “antisemitism” – the latter being a laughably misguided interpretation of Mason’s well-known Borscht-Belt style of Jewish self-deprecation.

At the Guardian, everything in Israel is political