In the past CAMERA UK has documented several ‘lifestyle’ articles written by freelancers for BBC Travel in which the topic of food was used to promote political narratives concerning Israel and the Palestinians. The ‘Israellycool’ blog now brings a similar recent item to our attention.

That BBC Travel feature – ‘The woman saving Palestinian heirloom seeds’, September 9th 2021 – was written by freelancer Tessa Fox who has previously had a food themed piece published on the same platform. Fox has also had content published at ‘Middle East Eye’ and she is a contributor to the controversial Qatari network Al Jazeera. 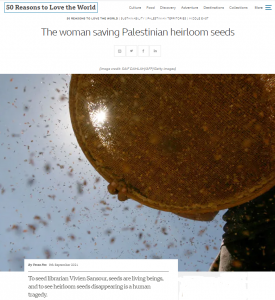 The article’s inadequately presented main protagonist is Vivien Sansour – a self-declared promoter of “agriculture as a form of resistance” – who has been featured in BBC content in the past:

The main location featured in Fox’s article is Battir.

“These terraces are rock-walled agricultural plots that have grown olives and vegetables since antiquity. Such farm designs, along with the ancient spring-fed irrigation system, secured Battir a place on the Unesco World Heritage List in 2014. This ancient landscape couldn’t be a more perfect home for an initiative, led by Vivien Sansour, that saves Palestinian heirloom seeds and in turn preserves cultural roots.”

As in previous BBC content relating to that location, no mention is made of its Jewish history.

Fox does however manage to shoehorn an irrelevant and context-free reference to ‘occupation’ into her piece:

“Heirloom seeds, which are non-genetically modified and open pollinated, are important for the health of agriculture all over the world. Sansour believes they are especially important for Palestinians who have been living under Israeli occupation of the West Bank since 1967.  “With each seed we can achieve more autonomy,” she said.”

Readers are even told (twice, apparently due to editing issues) that the wheat based products they consume are thanks to Sansour’s Palestinian ancestors:

“The land around Battir is part of the Fertile Crescent, along with modern day Iraq, Syria, Jordan and Lebanon. From this region, wheat was domesticated; some of the wheat Sansour and her community work with is approximately 10,000 years old, dating back to the beginning of agriculture. “The reason the English eat biscuits and everyone eats bread is because of our ancestors,” said Sansour.”

Once again BBC Travel goes down the all too familiar route of promotion of partial political messaging in commissioned ‘life-style’ articles that potentially reach audiences less familiar with the politics and history of the Middle East.