CAMERA UK’s archives include extensive documentation of the BBC’s partial and problematic portrayal of the anti-Israel Boycott, Divestment and Sanctions campaign (BDS). For years the corporation has reported related stories without adequately clarifying that campaign’s real agenda in its own words and in August 2015, we learned that the BBC considers the provision of such crucial background information “not our role“.

BBC audiences have repeatedly seen the BDS campaign inaccurately described as a “movement for human rights”, with no effort made to enhance audience understanding of the fact that its aims – as once again clarified by one of its leaders just last year – decisively contradict such branding.

On July 20th BBC departments rushed to cover a breaking story which is also to no small extent about branding strategies.

Early on that morning the BBC News website published a report headlined “Ben & Jerry’s to stop sales in Palestinian territories” on its ‘Middle East’ and ‘Business’ pages. 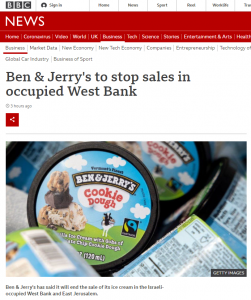 The report does not even mention the term BDS, let alone explain that political campaign’s agenda. It does however uncritically promote the boycotting company as one with so-called ‘progressive values’.

“The company said it was “inconsistent with our values for Ben & Jerry’s ice cream to be sold in the Occupied Palestinian Territory (OPT)”. […]

Ben & Jerry’s – which was founded in 1978 by best friends Ben Cohen and Jerry Greenfield – has a track record of campaigning on social issues such as LGBTQ+ rights and climate change.”

The BBC’s failure to clarify that a commercial firm’s jump onto the bandwagon of a political campaign that aspires to bring an end to Jewish self-determination is not indicative of any positive “values” or concern for “social issues” is clearly one major omission. Another is the absence of any examination of BDS campaigners’ efforts to get their cause branded as ‘progressive’ by having it adopted by a well-known company that has a long record of using social issues as a marketing tactic.

Those omissions clearly hinder audience understanding of the story as a whole and the reaction from the Israeli prime minister quoted in the report.

As is usually the case in BBC content, this report promotes the corporation’s standard and partial mantra on ‘international law’ without mention of alternative legal opinions and without any reference to Jordan’s illegal occupation of the territory concerned between 1948 and 1967.

“More than 440,000 Israeli settlers live among about 3 million Palestinians in the West Bank, land that Israel captured and occupied in a 1967 war.

Palestinians say this is the heartland of a future state and most countries consider Israeli settlements on Palestinian land to be illegal. Israel disputes this.”

Similar framing of the boycotting company as ‘progressive’ was evident in one of the July 20th editions of the BBC World Service radio programme ‘Newsday’. Presenter Lawrence Pollard introduced the item (from 05:57 here) as follows: [emphasis in italics in the original, emphasis in bold added] 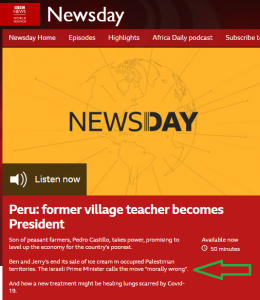 Pollard: “Now let’s talk about the ice cream brand Ben & Jerry’s: bit of a legend for its funny flavour titles. The image of sort of home-made ice cream, a progressive company. The company actually now [sic – since the year 2000] belongs to the consumer giant Unilever but despite that it’s announced it’s not going to sell its ice cream any more in the occupied Palestinian territories. Disinvestment and boycott campaigners have been pushing for this for nearly a decade. The response in Israel has been furious. Prime Minister Naftali Bennett says the decision was morally wrong. Foreign Minister Yair Lapid says it’s capitulation to antisemitism and former prime minister Benjamin Netanyahu has called for an Israeli boycott of Ben & Jerry’s. It might seem a bit of a trivial sidebar to bigger issues of life and death that we so frequently cover in the Middle East but there’s a lot going on behind this story and I heard from Dr Sara Yael Hirschhorn who’s professor in Israel studies at Northwestern University.”

Hirschhorn began by reinforcing the notion of Ben & Jerry’s as a ‘progressive’ company and introducing the irrelevant topic of racism into the framing.

Hirschhorn: “Ben & Jerry’s as a company has come out strongly against systemic racism, has launched new flavours of Ben & Jerry’s ice cream to mark, you know, the Black Lives Matter movement, has started a podcast about racism and has generally aligned itself, you know, over the last several decades with progressive causes in the United States. So Ben & Jerry’s very much has been associated with this kind of progressive activism so you can see how domestic consumption of ice cream also becomes a matter of international politics.”

As in the written report, no effort was made to clarify that a campaign – BDS – that aims to bring an end to Jewish self-determination is not a cause that can in any way be defined as ‘progressive’ – i.e. “favoring or implementing social reform or new, liberal ideas”. Once again, no effort was made to examine the topic of the company’s alignment with “progressive causes” as a marketing strategy or the symbiosis between a well-known commercial firm with such a reputation and a political campaign trying to pass itself off as a ‘human rights’ issue.

Pollard next asked his interviewee to explain “where the decision is coming from” but she was unable to inform listeners of the clash between Unilever, which issued the statement, and the Ben & Jerry’s board (chaired by a person who promotes BDS and anti-Israel messaging) which claims that it wanted to put out a more extreme statement. Neither did listeners hear anything about the company’s franchise in Israel which refused to cooperate with the demand to stop marketing in Judea & Samaria. 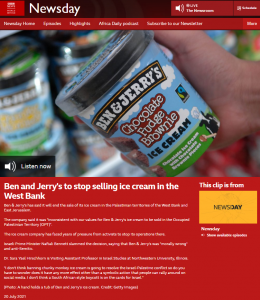 Towards the end of the item – a slightly longer version of which was also promoted separately on social media –  Pollard asked:

Pollard: “And I wondered in a sense for the campaigners, what is the point of this? I mean where’s this going to lead to?”

Hirschhorn: “I said rather cheekily that I don’t think banning Chunky Monkey ice cream is going to resolve the Israel-Palestine conflict so you have to wonder does it have any more effect other than a kind of symbolic action that people can rally round on social media. I don’t think that a South African style boycott is in the cards for Israel. There’s I think frankly too much at stake to allow that to go forward. So you do have to ask what will this really mean in shifting the climate of international politics or bringing Israelis and Palestinians back to the negotiating table. There isn’t sufficient pressure in, you know, banning a pint of ice cream to make that possible.”

Had the BBC bothered in the past to inform its audiences – and staff – that the BDS campaign is not remotely interested in “bringing Israelis and Palestinians back to the negotiating table” but rather aspires to see the end of Israel as the Jewish state, Pollard may have been able to explain to listeners that the real point of the campaigners’ decade-long pressure on Ben & Jerry’s is nothing more than delegitimisation of Israel with an added flavour of branding strategy and thereby actually inform them what is really “going on behind this story”.