The Guardian’s outgoing Jerusalem correspondent Oliver Holmes hasn’t filed a report about the region since June, and former correspondent Peter Beaumont has recently been covering the region until the media outlet announces Holmes’ permanent replacement.

When the new reporter begins work, he or she will be the fourth such Jerusalem correspondent we’ve monitored – beginning with Harriet Sherwood in 2010.  Though the institutional anti-Israel bias at the Guardian is such that the particular journalist they assign to cover Israel and the Palestinian territories is unlikely to significantly change coverage, the three correspondents we’ve posted about over the years have each demonsrated their own particular journalistic patterns and habits.

Beaumont, for instance, was adept at leading readers toward their desired anti-Israel conclusion by an artful turn of a phrase or strategic omission – traits which were on display in an article by Beaumont published yesterday (“Naftali Bennett makes first visit to Egypt by an Israeli PM in a decade”, Sept. 13).

The following sentence from the article is classic Beaumont, using vague language to blur causality:

the meeting [between Bennett and Sisi] comes against a backdrop of increased tension with Hamas, with Israeli aircraft striking a series of targets in the Gaza Strip early Monday while Palestinian militants launched rockets into Israel in the third consecutive night of fighting between the sides.

So, we’re told that Israeli aircraft struck targets in Gaza “while” Palestinian militants launched rockets into Israel, and that there has been three consecutive nights of fighting between the two sides. But, the timeline of events, and the question of who initiated ‘hostilities’, is left vague.  However, what clearly occurred is that, on late Sunday night, Palestinian terrorists in Gaza fired two rockets towards Israel.  The IDF responded to recent rocket attack by striking Hamas military targets.

On Friday and Saturday, the two previous days, the same sequence of events occurred: terrorists in Gaza fired a rocket at Israel, and the IDF retaliated on military targets in the strip.

Beaumont’s language blurred cause and effect, obfuscating the fact that Gaza terrorists initiated the fighting during the last three days.

Now, here’s another sentence from the article, one that grossly misleads via an omission:

The last meeting between an Egyptian president and an Israeli premier was in January 2011, when Hosni Mubarak received Benjamin Netanyahu, weeks before Mubarak was toppled in a popular revolution.

In the political turbulence that followed, relations between the two countries deteriorated as protests were staged outside the Israeli embassy in Cairo in 2011.

It wasn’t merely “protests” outside the Israeli embassy in September 2011 that caused a deterioration in relations.

An Egyptian mob got past embassy security, broke into the embassy and, if not for a last minute rescue by Egyptian commandos, would have almost certainly killed six Israeli security staff who were hiding in a safe room. The Guardian’s Jerusalem correspondent at the time, Harriet Sherwood, reported it: 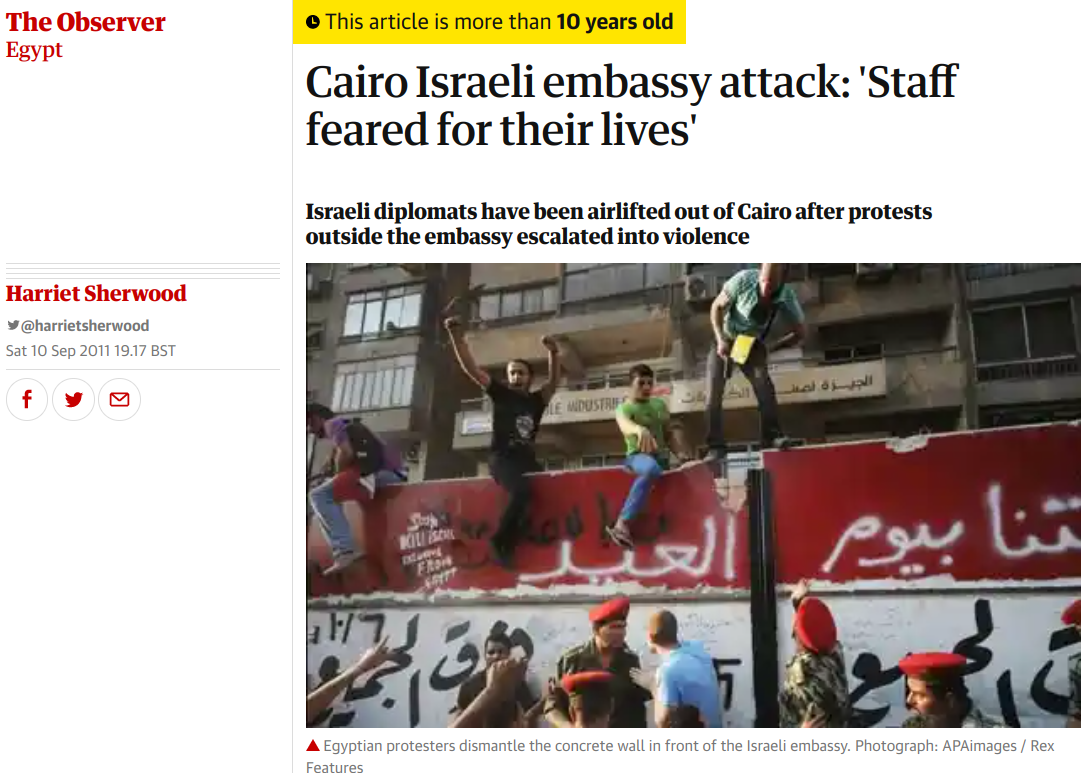 And, we know for sure that Beaumont knows what happened during the ‘protests’ because he personally commented on it (here) in the Guardian’s Live Blogging of the 2011 protests, two days after the embassy was stormed.

Though he departed Jerusalem over four years ago, Beaumont has clearly remained adept at contorting every Israel-related story in a manner minimizing the malevolence of its enemies.