An article in the Independent on the rise of antisemitism in Germany by the Berlin-based journalist Erik Kirschbaum did what so many media reports on anti-Jewish racism do: it focused entirely on the right-wing variety, whilst ignoring the far-left or Muslim variety.

The article (“How an antisemitic incident in Leipzig highlighted the chilling emergence of the far-right in Germany’s east”, Oct. 10) opened with a recent incident in Leipzig where a luxury hotel manager reportedly told an Israeli-German singer, Gil Ofarim, to cover up his Star of David necklace first if he wanted a room.  The incident, we’re informed, “triggered a wider discussion about an alarming trend in recent years in which antisemitism has become socially acceptable in some circles in Germany”.

Kirschbaum attributes this disturbing phenomena to younger generations feeling “less burdened by the crimes of their grandparents”, “the insidious effects of Covid-19 conspiracy theories” and creasing support for the far-right Alternative for Deutschland (AfD) party.  Regarding the latter dynamic, the writer uses the term “far-right” eight times in the context of explaining the country’s surge in antisemitism, both in reference to the general trend of Jew hatred and in noting a deadly 2019 attack on a synagogue.  Citing a more recent example, Kirschbaum recounts how, just last week, “fans of the Union Berlin football team shouted antisemitic insults at an Israeli team they were hosting during a match in Berlin”.

Kirschbaum was evidently unaware – or disinterested in reporting on – a series of antisemitic incidents in May that didn’t fit neatly into his narrative, as they were committed by largely Muslim anti-Israel activists.  This included the chanting of murderous antisemitic slogans and attacks on German synagogues.

Here are some specific examples:

Duesseldorf, Germany: Vandals threw trash on a Holocaust monument to a synagogue that had been destroyed on Kristallnacht in 1938. And then they lit the trash on fire.

Muenster, Germany: 15 people gathered outside the synagogue and burned an Israeli flag.

Bonn, Germany: During an anti-Israel demonstration in front of a synagogue, stones were thrown at the synagogue’s glass entrance and an Israeli flag was burned.

Here’s the incident on May 12th, with Muslim demonstrators outside a synagogue shouting “F*ck Jews”.

These incidents don’t occur in a vacuum, as studies have shown that Muslims in Germany (and in other EU countries) are far likelier to hold antisemitic views than the general population.  One extensive report by noted German academic Mathias Berek found “widespread enmity towards Jews” by Muslims in the country.  The report cited the following ADL statistics showing that Muslims in Germany are dramatically more likely than other Germans to hold classic antisemitic views. 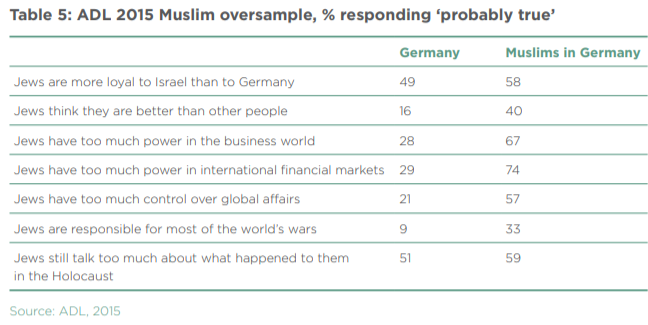 In our experience, those in the media reporting about the problem of antisemitism generally fall into two categories: those willing to follow the evidence wherever it leads, and those unwilling to thoroughly pursue their investigation if it leads to politically inconvenient places.  It seems clear, based on his complete obfuscation of Muslim antisemitism in Germany, that the Indy journalists is falls in the latter camp.

CAMERA Op-Ed: Pointing Out the Roots of Muslim Antisemitism Does Not Make You a Bigot