On the evening of January 19th the Jewish Chronicle published a recording of part of Malik Faisal Akram’s last phone call.

“The British terrorist who took four people hostage inside a Texas synagogue ranted about the “f***ing Jews” in the final phone call he made to his family during the siege, a recording obtained exclusively by the JC reveals. […]

The disturbing 11-and-a-half minute audio recording, obtained from a security source, reveals a conversation between Akram and his brother, Gulbar, 43, who was speaking from a police station in Blackburn in an attempt to persuade him to surrender.” 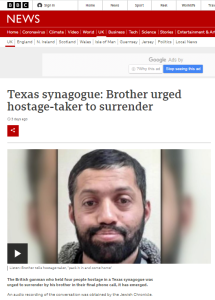 At the top of that report appears a twenty-one-second-long clip of part of the conversation which is labelled “Audio courtesy the Jewish Chronicle” and has clearly been taken from that paper’s three minute and 26-second-long recording.

The part of the recording selected by the BBC does not include Akram’s anti-Jewish remarks.

In the report itself readers are told that:

“In a barely coherent rant, thick with four-letter expletives, Akram rails against Jews and US military actions in the Middle East.”

Some eight hours after the initial publication of the report, the following sentence was added:

“In the clip Akram can be heard giving an anti-Semitic rant as his mental state deteriorates and the tension inside the synagogue increases.”

A news bulletin aired on BBC Radio 4’s ‘Today’ programme on the morning of January 20th also related to that recording (from 2:05:08 here).

Newsreader: “A recording has emerged of the final phone call a British gunman made to his family from a synagogue in Texas where he was holding four people hostage. The audio, obtained by the Jewish Chronicle newspaper, appears to be genuine. It reveals the desperate efforts made by Malik Akram’s brother to get him to surrender before he was shot dead by the FBI. Here’s our security correspondent Frank Gardner.”

Gardner: “The final phone call made by Malik Faisal Akram to his family back in Blackburn reveals both his deteriorating mental state and the increasing tension inside the Texan synagogue where he was holding people hostage. [a segment of the recording] His brother Gulbar tries repeatedly to talk him into surrendering, telling him that his hostages are innocent people. But Malik Akram, who had entered the synagogue pretending to be homeless before pulling a gun, tells his brother that he has set his heart on dying. In a barely coherent rant, filled with four-letter expletives, he rails against Jews and US military actions in the Middle East. He repeatedly calls for a convicted Pakistani neuroscientist, imprisoned in nearby Fort Worth, to be released. Crucially, Akram tells his brother ‘I’ve been praying for two years for this’. MI5 investigated him 18 months ago and decided he did not pose a risk to national security.” [emphasis added]

However also on January 20th, the same 21-second clip was published separately on the BBC News website’s ‘US & Canada’ page under the title “Texas synagogue: Last phone call between hostage-taker and brother”. 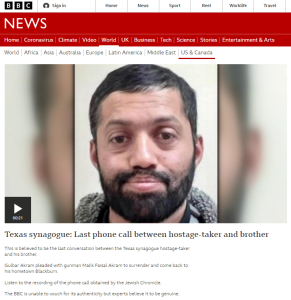 “This is believed to be the last conversation between the Texas synagogue hostage-taker and his brother.

Gulbar Akram pleaded with gunman Malik Faisal Akram to surrender and come back to his hometown Blackburn.

Listen to the recording of the phone call obtained by the Jewish Chronicle.

The BBC is unable to vouch for its authenticity but experts believe it to be genuine.”

That report makes no effort to inform viewers that there are parts of the recording that the BBC chose not to promote and that they include “an antisemitic rant” in which “Akram rails against Jews”.

That of course means that BBC audiences viewing this report are not provided with an accurate representation of its content which would help them understand the whole story.