University students in the UK will once again face increased anti-Israel campaigning on campus later this month in the form of ‘Israeli Apartheid Week’. The ADL has described that annual event as follows:

“Since its inception in 2005, Israeli Apartheid Week (IAW) has become one of the most well-known and virulent anti-Israel programs. In dozens of cities around the world each year, anti-Israel activists plan a weeklong series of events, usually in March, that are marked by allegations that Israel has become an “apartheid state” and that the Israeli government oppresses Palestinians in a manner akin to the repression of the Black majority in apartheid South Africa. Speakers at these events contend that Israeli policy regarding Palestinians and Arab citizens of Israel are predicated on racism and discrimination rather than legitimate security concerns.

In recent years, IAW programs have served as a platform for strategizing about Boycott, Divestment and Sanctions (BDS) campaigns against Israel because of the success of BDS efforts in dismantling the apartheid system in South Africa. Anti-Israel activists often call for various boycotts on Israel, including on Israeli academic and cultural institutions or on companies that do business with Israel, as part of the “action plan” to carry out following IAW.”

Indeed this year’s events, beginning on March 21st, are being promoted by the ‘BDS Movement’ and the ‘Palestine Solidarity Campaign’ using precisely such language:

“Israeli Apartheid Week (IAW) is a tool for mobilizing grassroots support on the global level for the Palestinian struggle for justice. It is a grassroots mechanism to raise awareness about Israeli apartheid and to mobilize support for strategic BDS campaigns to help bring an end to this system of oppression.”

“Israeli Apartheid Week (IAW) is an international week of action that has taken place for the last 16 [sic] years in over 200 universities and cities around the world. It aims to raise public awareness about Israel’s racial discrimination against all parts of the Palestinian people, which amounts to the crime of apartheid under international law. This week allows us to amplify Palestinian voices, build BDS campaigns, and show solidarity with the Palestinian struggle for justice.”

CAMERA on Campus has launched a new website called “Apartheid Week Exposed” providing material which will help students to counter the disinformation they are likely to encounter during IAW. 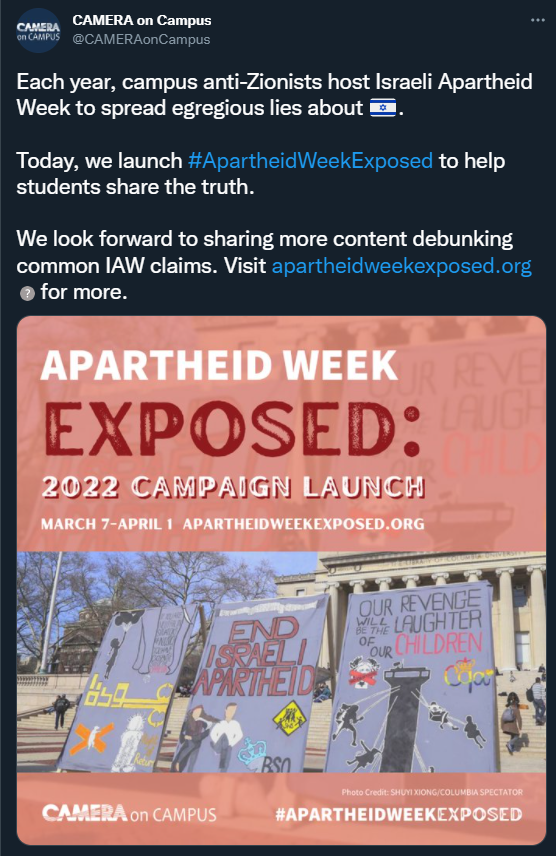 Readers are invited to share the link with family and friends.