On the evening of May 16th severe disturbances took place in Jerusalem during the funeral of Walid al Sharif (a member of Hamas according to that terrorist organisation) who was injured on April 22nd while rioting on Temple Mount.

“Six [police] officers were lightly injured by stones hurled at them by hundreds of rioters at a cemetery near Jerusalem’s Old City. Two of the officers were taken to a nearby hospital for further medical treatment, police said.

Footage showed rocks raining on the officers at several locations throughout the funeral procession. Other clips showed fireworks being set off in the direction of police, who responded with riot dispersal measures. Palestinians were “hurling stones, bottles, bricks and other heavy objects, as well as firing fireworks at the forces,” police said. […]

Police said the rioting took place both during the procession and at the gravesite, as well on Salah a-Din street. Palestinians also damaged several vehicles during the clashes and struck a number of passers-by, according to police.”

Footage shows wooden pallets, water storage tanks and other objects being thrown at the police from roofs, with resulting injuries. Additional videos show rocks and fireworks being hurled at the police, including from a graveyard. An apparent attempted car ramming attack also took place:

“Five Arabs were arrested after attempting to ram into Border Police forces in east Jerusalem on Monday evening, as riots broke out during the funeral of an Arab who was injured during recent clashes on the Temple Mount, according to Israel Police.

Israeli forces shot at the vehicle’s wheels and arrested the five who were inside the vehicle. Four of them are West Bank residents, while the other is a resident of northern Israel.

Videos from the scene show Israeli forces surrounding the terrorists’ vehicle after they attempted the ramming attack. No injuries were reported in the incident.”

The BBC showed no interest in reporting that violent rioting and the resulting injuries, including to passers by, and property damage (despite at least two of its Jerusalem based staff being aware of the events) until four days later.

On the evening of May 20th listeners to BBC Radio 4’s ‘The World Tonight’ heard a report from the BBC Jerusalem bureau’s Tom Bateman (from 24:35 here) presenting that story from the viewpoint of al Sharif’s family and promoting linkage between it and the funeral of Shireen Abu Akleh three days earlier. Notably, that latter story has now been reduced by the BBC to a one-liner about police ‘beating mourners’. [emphasis in italics in the original, emphasis in bold added]

Anna Holligan: “Now the family of a Palestinian man left seriously wounded after Israeli police stormed a cemetery have accused officers of using unjustifiable force. Police say they were acting to stop riots and protect officers. It comes after security forces ignited global condemnation after they beat mourners at the funeral of the Al Jazeera journalist Shireen Abu Akleh last week. Our Middle East correspondent Tom Bateman sent this report.”

Bateman: “[recording chanting] Monday night and the air felt volatile in East Jerusalem. This was the funeral of Walid al Sharif, a 21-year-old whose death had enraged Palestinians. He suffered fatal injuries during confrontations with Israeli forces near al Aqsa Mosque in April. Witnesses say he was hit by a rubber coated bullet fired by police but officers say he fell and hit his head throwing stones. And now another family member is in hospital: Walid’s older cousin Nader. I meet his relatives at the bedside. Nader is unconscious with a fractured skull. They tell me he was hit in the eye with a rubber coated bullet fired by Israeli forces during Walid’s funeral.”

Following a recording of Nader al Sharif’s wife speaking about her husband, Bateman continued, omitting all mention of the fact that Hamas had claimed Walid al Sharif as a member after his death and had called on Palestinians to participate in his funeral as a “challenge to the occupation”. Bateman unnecessarily qualified the throwing of rocks and fireworks documented on video as something the police ‘say’ happened.

Bateman: “Before Walid’s funeral police had tried to limit the number of mourners. There were confrontations. Security forces stormed into the cemetery, saying youths were throwing stones and rocks at them. They fired rubber bullets and tear gas in the graveyard. A correspondent for Palestine TV is reporting there live. Men are on the floor having inhaled the tear gas. Nearby Nader had just finished filling his cousin’s grave with soil. His family say he’d done nothing wrong and a video appears to show him gesturing at the police not to shoot but moments later he’s on the ground, badly wounded among the gravestones.”

Bateman went on to give a description of “running battles outside on Salah a Din street” which suggested that the unrest was a response to police actions rather than the other way round:

Bateman: “Police use stun grenades and water cannon. They [the rioters] throw objects back, at one point pelting police from a rooftop with solar panels and a water tank. Dozens of Palestinians and 11 police officers were injured.”

Bateman: “Back in the hospital, Nader’s family pray. But they also tell me they feel targeted. It reflects the mood for Palestinians in East Jerusalem, who accuse Israeli forces of growing brutality against them, made more acute after last week’s funeral of the Al Jazeera journalist Shireen Abu Akleh which saw mourners beaten as they carried her coffin. The police routinely deny accusations of unjustified force, instead blaming ‘rioters’ during recent incidents, adding they will uphold security.”

Bateman brought in another member of the al Sharif family:

Bateman: “One of Nader’s brothers, Nael, […] explains that police arrested Nader in the hospital bed, even though he was unconscious.”

Bateman recounted an incident that allegedly took place after the al Sharif brothers refused to leave the hospital ward, with Nael claiming to have been ‘shoved’ and ‘hit’ by a policeman.

Bateman: “In a statement Israel police said they had to use reasonable force to remove family members who had entered a medical area without permission and refused to leave. They say the men were agitated. The family though are demanding answers and it’s another sign of the worsening tensions in Jerusalem, with more volatile moments feared in the days ahead.”

Versions of that report were also aired on three BBC World Service radio programmes on May 21st: ‘Weekend’ (from 11:24 here), Newshour afternoon (from 08:38 here) and Newshour evening (from 18:54 here).

Also on May 21st, a written version of Bateman’s report was published on the BBC News website’s ‘Middle East’ page under the headline “Israeli police accused of violence towards shot Palestinian’s family”. 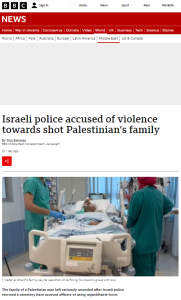 In that report too, Bateman describes the police attempts to restore public order as ‘storming’ and unnecessarily qualifies events using the phrase “the police say” and inverted commas.

“The family of a Palestinian man left seriously wounded after Israeli police stormed a cemetery have accused officers of using unjustifiable force. […]

Police say they acted because of “violent disturbances” in the graveyard and elsewhere in which their officers were attacked.”

“It comes amid a rapidly deteriorating atmosphere as Palestinians accuse Israeli security forces of growing brutality against them in occupied East Jerusalem. The police routinely deny this, instead blaming “rioters” during recent incidents and adding they will uphold security.”

As in the audio reports, Bateman promotes linkage between this story and an incident ahead of the funeral of Shireen Abu Akleh, which is once again presented without detail or context:

“The funeral came just three days after that of Al Jazeera journalist Shireen Abu Aqla, at which security forces kicked and beat pallbearers and fired stun grenades into the crowd of mourners, sparking international condemnation.”

Readers next find a video embedded into the report which has appeared in at least three other BBC articles.

Much of Bateman’s report is given over to obviously partial accounts from the al Sharif family while presentation of police statements is again unnecessarily qualified using inverted commas around the word rioters and the phrases “police said” and “police say”.

“Israel police said they were acting against “rioters” on Monday, which saw running street battles in part of East Jerusalem. Police injured dozens of Palestinians by firing rubber bullets, stun grenades and tear gas, while videos showed solar panels, a concrete slab and a water tank thrown at police from rooftops.

Police say stones, planks and bottles were thrown at them from within the graveyard and at least 11 officers were injured.”

Once again Bateman makes no mention of the relevant fact that Hamas claimed after his death that Walid al Sharif was a member of the terrorist organisation or that it urged participation in his funeral as a “challenge to the occupation”. 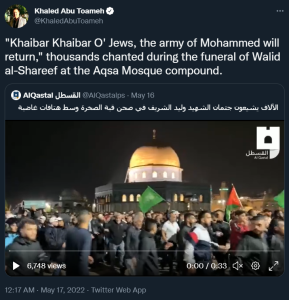 Although he did not question the family members he interviewed about the extensive violence at Walid al Sharif’s funeral, Bateman did however find it appropriate to give uncritical amplification to allegations of ‘racism’:

‘”Discrimination and racism are practiced against us by the [Israeli] occupation,” says Nael. “They make you feel that you are not welcome here, and this causes psychological pain.”’

As we see, while the BBC is eager to promote talking points about “unjustified force”, police violence, maliciousness and “brutality”, it considers it appropriate to put the term “rioters’ in inverted commas even though there is ample filmed evidence of those people engaging in extremely violent disturbances.

As was the case in reporting on Shireen Abu Akleh’s funeral, the BBC is notably less interested in telling its audiences about the use of such events for incitement and their exploitation by Palestinian factions, including terrorist organisations, for the purpose of delegitimisation and demonisation of Israel.

On May 23rd it was reported that Walid al Sharif was not killed by a rubber bullet as claimed by his family in all the above BBC reports but rather likely had a heart attack which resulted in brain injury. The reports also note that while the police requested an autopsy, the family refused.