Readers may recall that back in early February the BBC produced written and audio reports on the topic of the announcement of an investigation into allegations published by the Israeli business newspaper ‘Calcalist’. Listeners to BBC World Service radio, for example, were told that:

“Israel’s government says it will set up a commission of inquiry to examine allegations that the police used spyware to hack phones of Israeli public figures without authorisation. Officials, protesters, journalists, the son of the former prime minister Binyamin Netanyahu and a witness in Mr Netanyahu’s corruption trial were all targeted without court orders according to reports in the Israeli newspaper Calcalist. The police are alleged to have used Pegasus software, developed by NSO – an Israeli surveillance firm which had previously faced widespread criticism for selling the product to authoritarian governments across the world.” [emphasis in italics in the original]

When the results of an interim investigation were made public two weeks later, the BBC News website published a report headlined “Israeli inquiry finds no indication police used spyware unlawfully” but failed to add a footnote to its February 7th article to advise readers that the information that the BBC had reproduced from an unevidenced third-party newspaper report had been shown to be untrue. 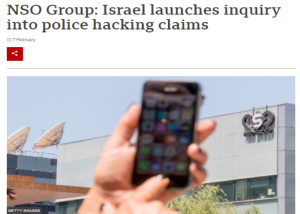 “3.3.13 Material supplied by third parties, including news providers, needs to be treated with appropriate caution, taking account of the reputation of the source.

We should normally only rely on an agency report if it can be substantiated by a BBC correspondent or if it is attributed to a reputable news agency.

We should only use other material supplied by third parties if it is credible and reliable.”

On August 1st the Justice Ministry released its final report.

“An in-depth Justice Ministry report published Monday largely rejected explosive allegations that the Israel Police had used spyware to illegally hack the phones of dozens of private citizens, finding that police acted largely in accordance with the law and did not use such spyware without legal oversight. […]

The 100-page Justice Ministry report released on Monday largely confirms the initial findings it published in February: that police did not hack the phones of most names included on the list published by Calcalist and that it did not act without judicial oversight.

“It was found that there was no indication that allegations that phones were tapped without a warrant were true,” the new report stated.”

To date the BBC has not produced any coverage of that final report and its original article promoting what are now known to be false allegations is still available online in its original form. As we already observed in February, some may call that promotion of fake news.