Some of the leading names of British theatre and film have criticised the cancellation of a prestigious lifetime award to the playwright Caryl Churchill because of her support for Palestinian rights, saying the move is “nothing less than modern-day McCarthyism”.

In April, [Churchill] was named the recipient of the 2022 European Drama award in recognition of her life’s work. The prize – worth €75,000 (£65,000), the biggest in Europe – is given by Schauspiel Stuttgart and sponsored by the Baden-Württemberg ministry of science, research and arts.

But earlier this month, the jury appointed by the theatre company retracted its decision and cancelled this year’s award, saying it had been “made aware of previously unknown information”

In a statement, the jury said Churchill had been chosen for the award “in recognition of her life’s work. However, we have meanwhile become aware of the author’s signatures in support of boycott, divestment and sanctions [BDS].

“The play Seven Jewish Children can also be regarded as being antisemitic. Therefore, to our great regret, the jury has decided not to confer the prize this year.”

Seven Jewish Children was written in 2009 in the aftermath of Operation Cast Lead, a three-week conflict in Gaza during which at least 1,383 Palestinians, including 333 children, were killed, according to Amnesty International. Thirteen Israelis, including three civilians, also died during the conflict.

Churchill’s 10-minute play was hailed by some critics but heavily criticised by others, including the Jewish Chronicle’s reviewer, who labelled it antisemitic.

On Thursday, Churchill said the play was about “families wanting to protect children and wondering what to tell them about terrible things, a pogrom, the Holocaust, finally the bombing of Gaza.

“It is critical of Israel’s treatment of Palestinians; it is not an attack on all Jews, many of whom are also critical of Israeli policy. It is wrong to conflate Israel with all Jews. A political play has made political enemies, who attack it with slurs of antisemitism.”

As the CST noted, “The Guardian [in 2009] published a positive review of the play by Susannah Clapp, two by Michael Billington and even produced its own video version of the play which is still available to view on the Guardian website.” 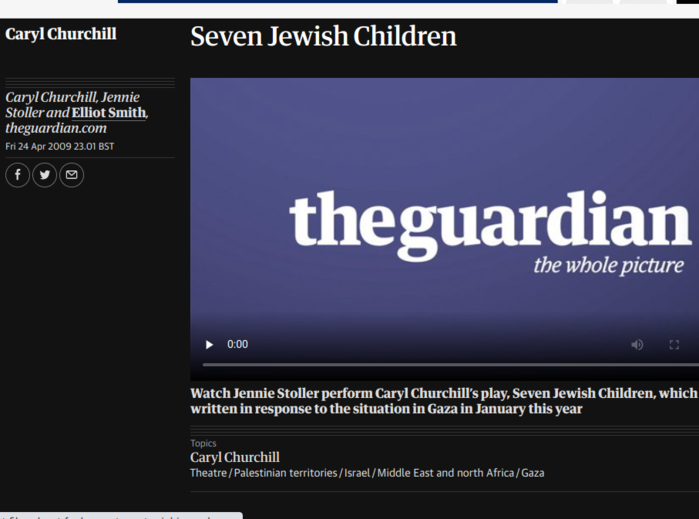 But, despite Sherwood’s framing, it wasn’t only the Jewish Chronicle that called it antisemitic.

Mark Gardner and Dave Rich of the CST not only argued it was antisemitic by “slander[ing] Jews as being psychologically compelled to become the new Nazis”, but that it evoked the ancient blood-libel.  The blood libel characterisation of the play was echoed by both Anthony Julius (author of Trials of the Disapora: A History of Anti-Semitism in England) and the late antisemitism scholar Robert S. Wistrich.

Award-winning British author Howard Jacobson similarly found in the play echoes of the ancient accusation that Jews have a particular bloodlust for the murder of non-Jewish children, writing the following in an op-ed at the Independent:

Thus lie follows lie, omission follows omission, until, in the tenth and final minute, we have a stage populated by [Jewish] monsters who kill babies by design – “Tell her we killed the babies by mistake,” one says, meaning don’t tell her what we really did – who laugh when they see a dead Palestinian policeman (“Tell her they’re animals… Tell her I wouldn’t care if we wiped them out”), who consider themselves the “chosen people”, and who admit to feeling happy when they see Palestinian “children covered in blood”.