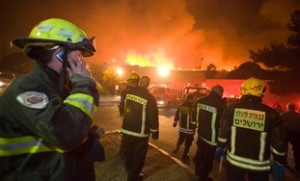 The Jerusalem Post is reporting that blazes were still raging in the following areas: Bet Oren, the area between Ussafiya and Hik Creek, the Bar-Chai wildlife reserve, Nir Etzion, and Ein Hod. Ground and air units were tackling the blazes. Police were ensuring the area was sealed off to members of the public.

Fire Department officials were saying that winds are changing every 15 to 20 minutes, complicating efforts of firefighters, and that efforts to put out the Carmel fires will likely last another week.  Ten-thousand acres (40,000 dunams) have burned so far in the fire that killed 41 people and left many others injured.

0 replies on “Fires still raging. Frequent wind changes complicating efforts to control fire, which may not be fully extinguished for another week”