No, I shouldn’t have to post about this.  In a world where political correctness and ideology didn’t hold sway over often unpleasant realities about the nature of anti-Semitism in our day, the results in the following poll would be widely reported, and answers would be demanded of the groups shown, once again, to possess an animosity towards Jews that can only be described as shameful – a word which also could be used to characterize those who fancy themselves enlightened, sensitive souls and yet continually turn a blind eye to such bigotry.

The important factor when considering the validity of polls is whether the results of any given study can be duplicated.  That is, it’s one thing if one poll demonstrates a certain tendency but quite another when subsequent polls produce the same or similar results.  As such, during U.S. elections, you often see (in the months leading up to the Presidential election) the results from polls, conducted each week, gauging the likelihood that voters will vote for a particular candidate.  The result of such methodology is that you can see trends and test for the overall accuracy of the results.

Pew Global just released a poll on Muslim-Western attitudes which compares the results from their 2006 study.  Among the views explored was attitudes towards Jews – in the U.S., Spain, Britain, Germany, France, Russia, Israel, Turkey, Jordan, Egypt, Lebanon, The Palestinian Territories, Indonesia and Pakistan.

While the U.S. leads in the percentage of citizens who have favorable attitudes towards Jews (82%), the nations where favorable attitudes towards Jews are in the single digits – mirroring the results of the same poll in 2006 – are the Muslim, or mostly Muslim, nations: Turkey, Jordan, Egypt, Lebanon, The Palestinian Territories, Indonesia, and Pakistan.

Here are the results: 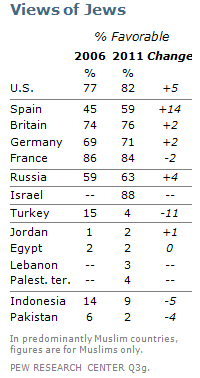 In a world where many continually claim that there isn’t a necessary relationship between anti-Zionism and anti-Semitism – with the former being perfectly acceptable but the latter intolerable – the poll results pertaining to Muslim hostility towards Jews (and not merely Israelis) would seem to present a valid moral test to those who claim to be genuinely outraged when confronted with evidence of undeniable, explicit anti-Semitism.

In other words, we can expect the chilling results of this poll, demonstrating once again that anti-Semitism in the Muslim world is at epidemic proportions, to be completely ignored by the Guardian.

Like Loading...
Tags from the story
Anti-Zionism, Antisemitism, Comment is Free, General-antisemitism, Guardian, Palestinian territories
Written By
Adam Levick
More from Adam Levick
A few hours ago, we posted about a wildly inaccurate and propagandistic...
Read More