The following passage in Harriet Sherwood’s latest post, “Palestine to press for UN on statehood as soon as possible“, Sept. 25, represents a perfect illustration of the appalling disregard for the humanity of Israeli victims of terrorism by the Guardian’s Jerusalem correspondent.

The 15-member security council is due to begin considering the Palestinian request on Monday amid rising tensions in the West Bank following the shooting dead of a Palestinian villager by Israeli soldiers and the death of a Jewish settler and his son in a car crash that police said was probably caused by rock-throwing. [emphasis mine]

The circumstances behind the Palestinian reportedly killed by Israeli soldiers, who were attempting to defend against violent protests near Qusra, are still being investigated.

The Israeli Jews, on the other hand, were almost certainly murdered by Palestinian terrorists, who intentionally threw rocks at an Israeli vehicle near Kiryat Arba in order to kill the Jewish occupants.

For Sherwood, Palestinian “villagers” are shot dead by a clear protagonist, “Israeli soldiers”.  While Jewish “settlers”, according to Sherwood, are killed, not by Palestinian terrorists, nor Palestinians, nor terrorists, and not even by amorphous rock throwers but, rather, by the act of “rock-throwing”.

Here is a photo of the Israelis murdered by Palestinian terrorists, Asher, 25, and his one-year old son, Yehonatan: 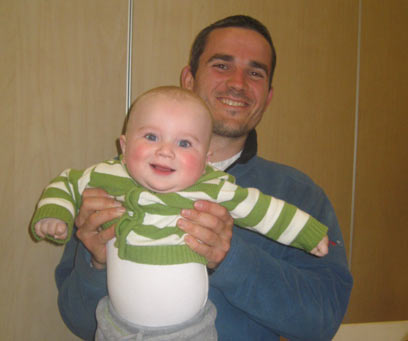 For Sherwood, even a murdered one-year old baby is merely the son of a “settler”.

Asher and Yehonatan were laid to rest today in Hebron.