83.8 million went to the region designated as “Middle East and North Africa”. 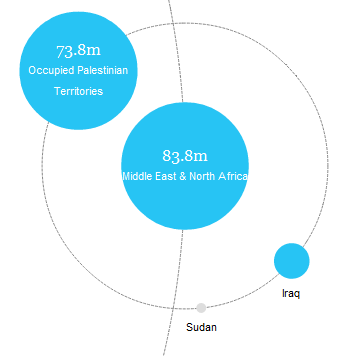 So, the Palestinian Territories received 88.8% of the total regional aid. While (Northern) Sudan received absolutely nothing. (Southern Sudan is listed separately in the Africa region)

Other nations more impoverished in the region than the West Bank and Gaza, according to the CIA fact book, which received no aid include Yemen and Chad.

More broadly, looking at the West Bank alone, The Palestinian Authority’s Human Development Index – a measure of life expectancy, literacy, education and standards – is 97th out of 193 countries in the world, which places them ahead of Egypt, Syria and Morocco.

And, of course, this doesn’t include additional international aid which the Palestinians receive annually.

Here are the top ten donors, listed in U.S. dollars:

So, the Palestinian Territories (population 4.043 million), receive more economic aid per capita from the world than military aid received by Israel, population 7.7 million, from the U.S.

Finally, it’s important to note that Israel is pro-West, and a strong U.S. ally, while the Palestinians are, based on annual public opinion polls, (even under the Obama Administration) overwhelmingly anti-American.

These facts would seem, at the very least, worth noting in the context of the continuing drum beat of accusations by anti-Zionists regarding U.S. aid to Israel.