As we reported yesterday, the Guardian didn’t deem as newsworthy a brutal attack (in Villeurbaine) near Lyons, France, by a mob of over a dozen Muslim youths Saturday night, on three 18-year-old yarmulke wearing Jewish men, who were beaten with hammers and Iron bars.

As we noted, one of the young men suffered an open wound on his skull, and one girl had a neck injury.

The French Interior Ministry confirmed that the the assault was motivated by antisemitism.

More details have been reported on the attack, including the fact that some of the Muslim attackers yelled ‘dirty Jew,’ and cursed and spat on the victims.

“Speaking to Ynet, the father said his son [one of the victims of the attack] has recovered physically, “but psychologically he’s weak, very frightened. When people attack you with a hammer – it’s not not an everyday occurrence. My son is 19, and his friends are about 20, and they are all afraid to leave the house. Eli isn’t angry because it’s not in his nature, but he’s been very quiet since the incident.”

Rabbi Gorvitch [the community Rabbi] said Villeurbaine’s Jewish community has been targeted before. “We are regularly cursed at and spat on.” Just last month, he said, a youngster riding on a motorcycle fired rubber bullets at a car that was being driven by a man wearing a yarmulke.

Per Times of Israel:

Joël Mergui, president of the Central Consistory, an umbrella organization working to coordinate local Jewish communities, said the country’s Jews were under constant attack. “Not a week passes without anti-Semitic assaults in France.

The chief rabbi of the Grand Synagogue in Lyon, Richard Wertenschlag, called the atmosphere “unbearable.”

“In the month following the Merah [massacre in Toulouse] we counted 140 such acts,” said Goldman. “This amounts to a third of the violent incidents we had in [all of] 2011.”

To put the Guardian’s decision not to run the story in perspective, even Lebanon’s paper, The Daily Star, ran this AP story on June 3: 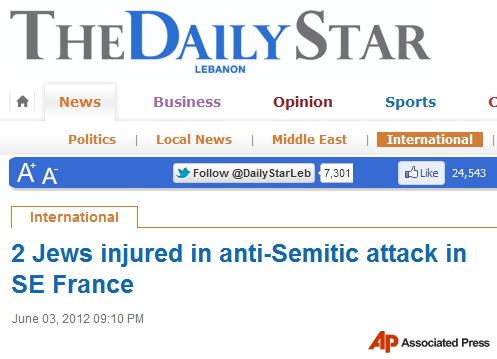 Like Loading...
Tags from the story
Antisemitism, Daily Star, France, General-antisemitism, Guardian
Written By
Adam Levick
More from Adam Levick
On Aug. 20 we posted about an article published at The Telegraph...
Read More