First there was Israel’s war on the culinary arts, when the Jewish state sadistically detained a Palestinian “baker” named Khader Adnan, who moon-lighted as a terrorist and – perhaps while waiting for his bread to rise – found time to incite his followers to carry out suicide attacks against Jews.

The Semitic polity’s latest assault on Palestinian arts and recreation, dutifully reported in the Palestinian territories section of the Guardian by Harriet Sherwood, was presented on June 6th as this:

The soccer angle has actually been played up even more egregiously by the BBC in an audio available at the ‘World Football’ section of  BBC World Service. Here’s a simply risible quote from the transcript:

At a Palestinian site called Alresalah Press, there is this dramatic feature story about Sarsak: 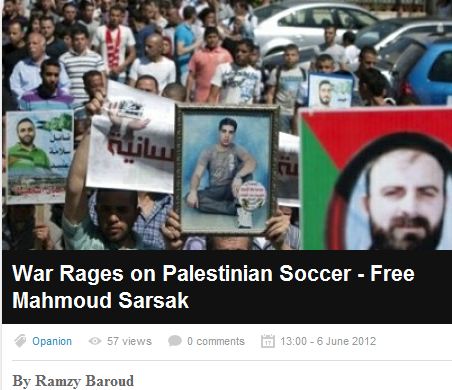 Back to the Guardian story; Sherwood writes:

“Mahmoud Sarsak, 25, has refused food for 80 days, since 19 March. He began his hunger strike after his “administrative detention” order was renewed for the sixth time.”

“He was arrested in July 2009 while on his way from his home in Gaza to a national contest in the West Bank.”

“Sarsak’s family deny that he is a member of any militant organisation.”

Well, the word of Sarsak’s family is clearly good enough for Sherwood. Indeed, the Guardian’s Jerusalem correspondent failed to provide even one sentence devoted to Israel’s side of the story.

It took me all of seven minutes on Google to find the following information on why Sarsak is being held, at the site of Israel Democracy Institute, titled: “Supreme Court Approves Extension of Unlawful Combatant“.  Here are the key passages from the Israeli Supreme Court decision on Sarsak’s detention.

“On July 22, 2009, the appellant, Mahmoud Sarsak, a Palestinian from Gaza, was captured for interrogation and, since August 23, 2009, has been detained under the Unlawful Combatants Law.  Every six months since that date, Sarsak has been brought before the Tel Aviv district court for a total of five periodical judicial reviews to extend the period of his detention pursuant to the requirements of the Law. His first five extensions were subsequently approved by the Supreme Court following Sarsak’s appeals of the district court decisions.

On March 12, 2012, Judge Dr. Oded Mudrik of the Tel Aviv District Court approved a sixth extension of Sarsak’s detention, holding that in accordance with the available information submitted to the court, Sarsak, who was an active member of the military wing of the Islamic Jihad terror organization, might attempt to rejoin that organization if released. Judge Mudrik emphasized that this risk assessment was based on concrete intelligence updated monthly. [Emphasis added]

Following the decision, Sarsak appealed to the Supreme Court again, claiming that he no longer has any connections with the Islamic Jihad and, therefore, his detention constitutes punishment without a trial. On April 29th, Justice Hanan Melcer published his decision to reject Sarsak’s appeal. Justice Melcer held that after reviewing the information presented to him ex parte by the State, and after taking into account the long period of time that Sarsak has been held in preventive detention, the considerations supporting the continuation of his detention still outweigh Sarsak’s interest to be released from the prolonged administrative detention.”

Of note: there was nothing in the Israeli Supreme Court’s decision to extend Sarsak’s detention which appeared to express concern over the threat posed to the state by Palestinian soccer, or sports/recreation more broadly.

Could it be that what appears to the untrained Guardian reader eye as an Israeli war on soccer may actually be a quite counter-intuitive war on Palestinian terrorism?

(Final note: the stellar blog Challah Hu Akbar informs us that Islamic Jihad’s Saraya (military wing) website has a plethora of articles on the soccer star from Gaza.)