As longtime readers will be aware, BBC portrayal of the topic of permits for Gaza Strip residents who need to enter Israel for medical care is completely one-sided and inevitably focuses on cases in which people have had difficulties obtaining medical travel permits. 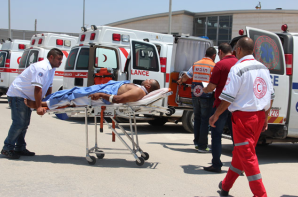 However, as we have documented here in the past, the BBC concurrently avoids reporting stories which would explain to its audiences why those travel permits are a necessary part of Israel’s counter-terrorism measures.

Last week another such story emerged when the Israel Security Agency announced the arrest of a member of Hamas who had entered Israel on a medical travel permit.

“Hamas member Ahmad Abu al-Nour, 27, was arrested on January 24, and has since provided interrogators with vast intelligence about the terror group, the Shin Bet said.

According to Israeli authorities, al-Nour entered Israel for medical treatment last year but never returned home, instead staying in Israel illegally “for a number of months.” […]

In Israel, al-Nour attempted to find people who may be interested in joining or assisting Hamas, sending back the names of potential recruits to his handlers in Gaza, the Shin Bet said. […]

Unlike in many cases in which Hamas has taken advantage of vulnerable Palestinians with medical permits to advance its aims, in this case, al-Nour was a long-time, willing member of the organization, according to the Shin Bet. […]

The security service, which has long warned that Hamas takes advantage of medical permits to advance its own interests, said the case of al-Nour “again exposes the cynical abuse by Hamas… of humanitarian permits that are given to Gaza residents.””

Unsurprisingly given the BBC’s record, its audiences have to date seen no reporting whatsoever on that story. That of course means that audience understanding of why Israel implements measures such as medical travel permits continues to be compromised.