In a ‘Comment is Free’ piece titled “Online racist abuse: we’ve all suffered from it“, five writers were asked to reflect upon the racist abuse they have suffered as the result of their commentaries.  The Guardian editor noted that the piece was inspired by Mehdi Hasan’s CiF essay on the Islamophobic abuse he has endured online. (See our post on Hasan’s polemic here.) 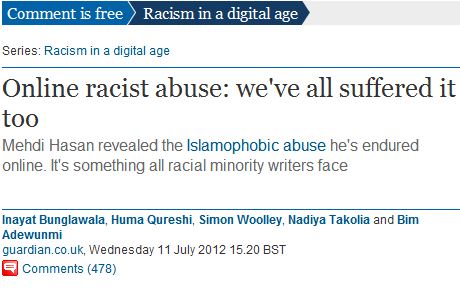 (Though three Muslims are included, all of whom address the issue of anti-Muslim prejudice, there were no Jews chosen to address the problem of antisemitic abuse.)

The most curious decision made by the Guardian editors was to choose Inayat Bunglawala – founder and chair of Muslims4UK and a representative of the group of iEngage – to contribute.

In his CiF piece on racist abuse, he writes:

“Since I started writing on Cif back in 2006, I have regularly seen what can only be described as McCarthy-style online witchhunts against those Muslims who raise their heads publicly to criticise government policies…”

“The “war on terror” has helped foster an atmosphere where bigotry against Muslims is often seen to be less offensive than that expressed against other minority groups.”

Bunglawala then proceeds to detail specific examples of the anti-Muslim bigotry to which he has been subjected.

So, who is Inayat Bunglawala?

“Bunglawala is part of an organisation, Muslim Council for Britain – which tells the British public what it wants to hear on subjects such as the 7/7 terror attacks, but at the same time objects to Holocaust Memorial Day, campaigned against the law on the glorification of terrorism on the grounds that it was “unfairly targeting Muslims and stifling legitimate debate” and opposed the publication of the ‘Danish cartoons’.”

Bunglawala seems consumed by an obsession with Jews, Zionists and ‘Jewish power’:

“As I argued in my previous blog, Zionists view any political progress made by Muslims (or ‘Islamists’ as they term them) as detrimental to their interests.”

The CST also noted that, writing in the magazine Trends in 1992, “Bunglawala presented evidence of what he considered to be excessive Jewish influence over the UK media.”

“The chairman of Carlton Communications is Michael Green, of the tribe of Judah. He has joined an elite club whose members include fellow Jews Michael Grade (Chief Executive at Channel Four) and Alan Yentob (Controller at BBC2 and friend of Salman Rushdie). The three are reported to be “close friends” (The Times, Oct. 17). So that’s what they mean by a “free media”!” [emphasis added]

Even more disturbingly, Bunglawala has praised some of the most hateful Islamist terrorists:

Bunglawala praised Yassin. During a BBC interview, he said:

He also said this, arguing that Yassin wasn’t a terrorist:

Bunglawala praised the homophobic, extremist Muslim Brotherhood spiritual leader, Sheikh Yusef Qaradawi, who approves of female genital mutilation, believes that women who are the victims of rape should be punished for their sin of tempting their innocent male attacker, and that Allah should kill all the Jews, “down to the last one“.

“Sheikh Al-Qaradawi is an Islamic scholar who commands huge respect among millions of Muslims worldwide. As a regular past visitor to the UK, he would consistently urge British Muslims to shun all forms of extremism and to focus their energies on ensuring that their children excelled in education”

Sheikh Omar Abdul Rahman (the former leader of Al-Gama’a al-Islamiyya, an Islamist terrorist movement in Egypt, convicted of plotting a terror attack in the U.S.)

According to The JC, quoting the Telegraph, Bunglawala called the Sheik Rahman “courageous” – just a month before he bombed the World Trade Center in New York. After Rahman’s arrest later that year, Bunglawala said:

“[Rahman was arrested] because of his calling on Muslims to fulfill their duty to Allah and to fight against oppression and oppressors everywhere”.

A few months before 9/11, Bunglawala circulated writings of Osama bin Laden, who he regarded as a “holy warrior” and “freedom fighter”.

Given Bunglawala’s record of antisemitism and his past support for some of the most dangerous Islamist extremists in the world, what conceivable argument could be made that he possesses an ounce of moral authority on the problem of racist abuse?

It is this simple: you can’t support extremists who openly seek the murder of Jews all over the world and then claim the mantle of anti-racism.

And, if you are a media institution which gives license to such commentators, then you – by definition – can not claim to be a “liberal voice”.