‘Comment is Free’ published eleven articles on its ‘Israel’ page throughout the month of August 2012.

Five of those articles (including an editorial and a cartoon) related to the Rachel Corrie court case which came to its conclusion on August 28th, with four of those five articles published on that day and one a day later.

One article, by Readers Editor Chris Elliott, related to the whirlwind hiring and firing of Josh Trevino. One was an article by Antony Lerman and three (including an editorial) related to the subject of a theoretical conflict between Israel and Iran. One article, by Itamar Rabinovich, presented the Israeli view of the crisis in Syria.

Out of a total of 91 editorials published by the Guardian during August, on subjects as diverse as British apricots, the UK railway system, the Olympics and the US elections, two are devoted to Israel.

On the ‘Israel’ page of the Guardian’s World News section, 67 articles appeared during August, including the 11 also posted at ‘Comment is Free’.

Again, the Rachel Corrie trial was allocateddisproportionate amounts of column space with no fewer than 11 articles. Thirteen articles were devoted to the subject of Iran and three to Syria. Five pieces, including three videos, related to Leon Panetta’s visit to Israel at the beginning of the month and one article to US Presidential candidate Mitt Romney. Two articles related to the Josh Trevino affair – one by Readers Editor Chris Elliot (also published on CIF) and one letter.

Nine articles concerned the terror attack against both Egyptian and Israeli targets on August 5th and the subsequent Egyptian operations in Sinai. Remarkably, after some 27 months in Israel, Harriet Sherwood managed to find her way to Kerem Shalom and even to interview an Israeli resident of the kibbutz. The coverage amounted to one paragraph at the end of her August 8th article.

“At the Kerem Shalom kibbutz, tucked into a corner of southern Israel where the Gaza and Egyptian borders intersect, Andy Breakell said the community was accustomed to mortars and rockets being fired from Gaza, “but [Sunday’s attack] was an escalation, a different ball game”. Residents of the kibbutz were ordered to take shelter in protective rooms during the attack, from which the Manchester-born Breakell, 58, watched 100m sprinter Usain Bolt win a gold medal at the London Olympics.”

Apparently terror attacks can not be so bad after all if one doesn’t even have to miss the Olympics.

A video report from August 3rd noted “tightened” security for Palestinians during Ramadan. Obviously, no contrasting report on the 300,000 Palestinian visitors to Israel during the holiday of Eid al Fitr was deemed necessary.

Also on the ubiquitous theme of ‘Israelis behaving badly’, the Guardian covered Ambassador Gould’s interview with Channel 10, complete with loaded illustration and misspelt caption (one really would expect Guardian sub-editors to be able to spell the subject of their obsession by now). 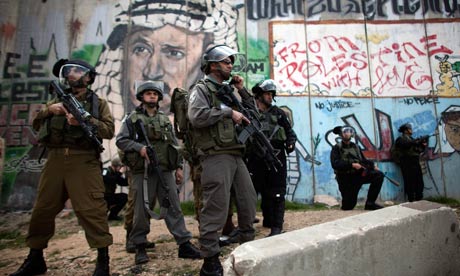 “Israeli border police at the Kalandia checkpoint between Ramallah and Jerusalem. The British ambassador says Isreal is losing international support, and is being perceived as Goliath, and Palestine as David. Photograph: Oliver Weiken/EPA”

Also covered were the trial of a former soldier in relation to a lethal event during Operation Cast Lead, “settler violence”, an incident in which Jewish youths attacked an Arab youth, a report by the anti-Israel NGO ‘Breaking the Silence’ (2 pieces) and the alleged tasering of an Arab man by Israeli security forces at a water park.

A UN report on a potential “water crisis” in Gaza, the South African decision to add strength to the BDS campaign by labeling Israeli “settlement” goods and the Golan Druze were also the subjects of articles.

Among the events not reported during August by the Guardian was the uncovering of a Hamas terror cell and the arrest of two suspects in connection with the lynching of two IDF reservists in 2000 as well as the arrest of an Israeli Arab smuggling cell which allegedly transported explosives into Israel on behalf of Hizballah.

The firing of two Grad rockets at the southern city of Eilat went unreported, along with 20 other missiles fired from Gaza at Israeli civilian communities throughout the month, including those which deliberately targeted pupils returning to school after the summer holidays. One can only imagine how much column space would be found were British school-children to sustain such attacks.

None of the daily stoning and Molotov cocktail attacks – frequently directed at Israeli motorists and public transport – was reported by the Guardian’s Jerusalem correspondent during August.

Ramadan visits by children and adults in Gaza to deliver candy to Palestinian Islamic Jihad terrorists and Al Quds day events in Gaza were ignored (as in London) by the Guardian. No coverage was given of the ‘graduation’ of the first class of diploma-holding terrorists from the new PRC ‘Academy’ in the Gaza Strip or the call by a serving Minister in the Hamas government for “suicide bombing attacks and “resistance” (i.e., terrorism) in Judea, Samaria and the Gaza Strip, as well as the abduction and murder of Israelis to secure the release of Palestinian prisoners”. A massive military drill held by Hizballah was also not covered by the Guardian.

Does the financially compromised Guardian really need to keep a full-time correspondent in Jerusalem when the yield is a continual track-record of selective and unbalanced reporting?

Like Loading...
Tags from the story
August 2012, Comment is Free, Gaza, Guardian, Harriet Sherwood, Hezbollah, Israel, Terrorism, Uncategorized
Written By
Hadar Sela
More from Hadar Sela
Since the outset, the BBC has provided uncritical amplification of allegations from...
Read More