The BBC’s Middle East Editor Jeremy Bowen held a Q&A session on Twitter on December 14th, which the BBC then turned into an article which was posted in the Middle East section of its BBC News website. 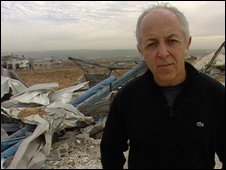 Some of Bowen’s answers to questions posed by the public were –to say the least – disappointingly predictable.

“Question from @carolshorenye: BBC reports seem critical of Israel. Does the BBC recognise this bias and want to report more neutrally?

In other words, barely a month after a BBC reporter joined the anti-Israel propaganda campaign by Tweeting a picture of a Syrian child casualty as though it came from Gaza, the BBC Editor in charge of Middle East content – whose post was created in the wake of the unpublished Balen Report specifically to act as a ‘gatekeeper’ of that content –  is apparently still of the opinion that the BBC meets its obligations on accuracy and impartiality impeccably.

“Question from @cruachan8520: What and where has been your scariest moment?

Jeremy answers: Scariest place ever was Grozny winter of 1994/5. Worst day was when Israelis killed BBC fixer in Lebanon in 2000.”

Bowen was not asked what his “worst day” was, but uses the opportunity to push the story of his Lebanese driver anyway – yet again – with a very interesting and revealing choice of words. We learn nothing about what was scary in Grozny, but Bowen does take the trouble to ensure that readers are left with the impression that “Israelis killed” a BBC employee rather than his driver having been killed in an unfortunate accident.  The questions raised in this article on the subject therefore remain as relevant as ever.

“Question from @JackMendel4: Do you think a two-state solution is still a viable option?

This answer is interesting from several aspects. Firstly, the use of the term “both sides” clearly reflects a lack of comprehension of the fact that with Palestinians divided into multiple factions, there are much more than two sides to be taken into consideration.

Secondly, Bowen’s ability to ignore Israel’s repeated commitment to the two state solution is almost as bizarre as his suggestion that Hamas ever embraced it. His apparent wish to ignore what Hamas has been saying repeatedly and clearly for the past 25 years since its establishment – along with the numerous other terrorist organisations which rejected the Oslo accords and engaged in a war of terror to bring about their demise – is nothing less than negligent coming from a person whose job it is to inform BBC audiences of the facts about the Middle East.

This Q&A session gives little reason for hope of improvement in the BBC’s Middle East reporting as long as the editorial keys to it are held by Jeremy Bowen.