The final item in the June 16th afternoon edition of the BBC World Service radio programme ‘Newshour’ (from 49:10 here) was introduced by presenter Razia Iqbal as follows: [emphasis in italics in the original, emphasis in bold added]

Iqbal: “…let’s head to Gaza where overnight Israel says it carried out airstrikes after Hamas, which controls the territory, launched incendiary balloons from the territory in the first major flare-up since an eleven-day conflict last month. Hamas said the incendiary devices sent into southern Israel were a response to a march by Jewish nationalists in occupied East Jerusalem.”

The word response is defined by the Oxford English Dictionary as “a reaction to something”. In this case, the something – the “march by Jewish nationalists” – had not yet happened when Hamas began launching airborne incendiary devices into Israeli territory.

The flag parade in Jerusalem began at 6 p.m. on June 15th.

The launching of incendiary balloons from the Gaza Strip began several hours prior to that. By 4:24 p.m. the Times of Israel had reported that:

“Numerous fires blazed in southern Israel near Gaza on Tuesday, with fire services saying at least 20 were sparked by balloon-borne incendiary devices launched by terrorists in the Strip.” 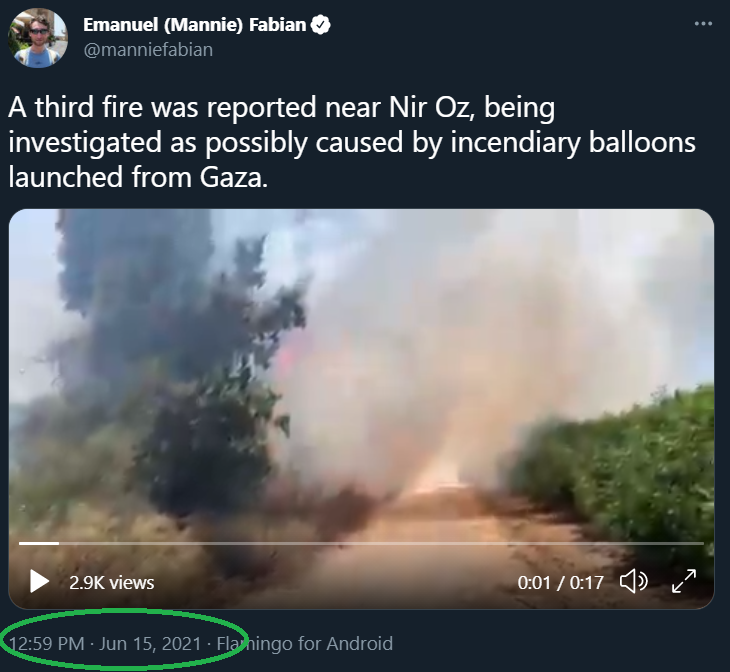 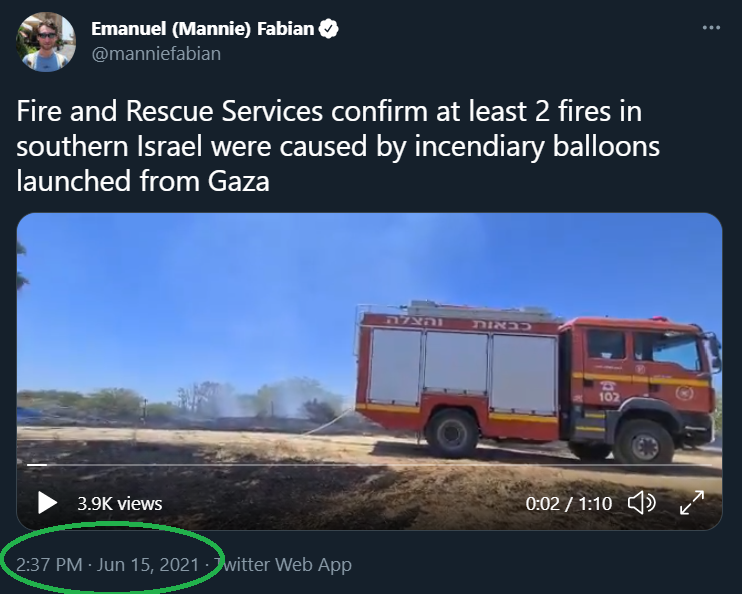 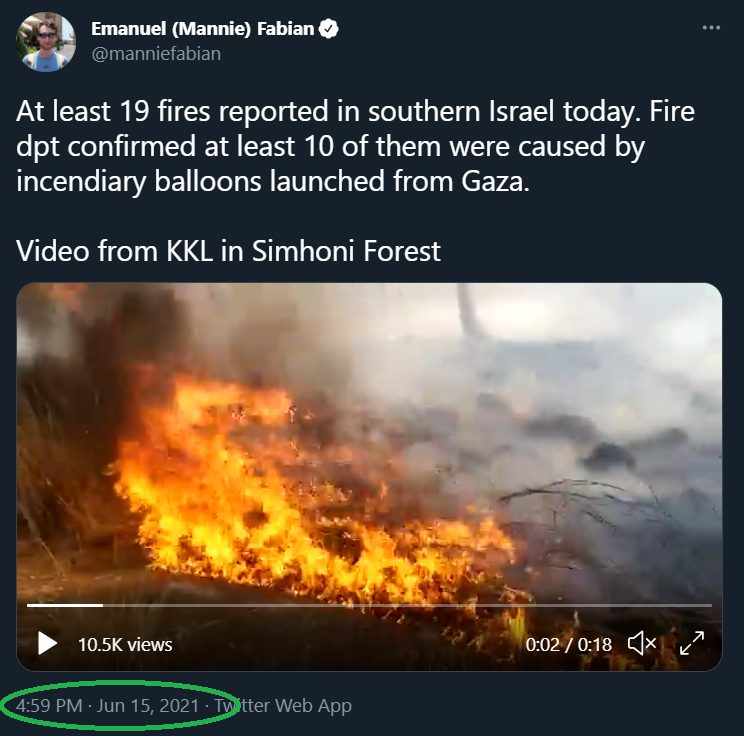 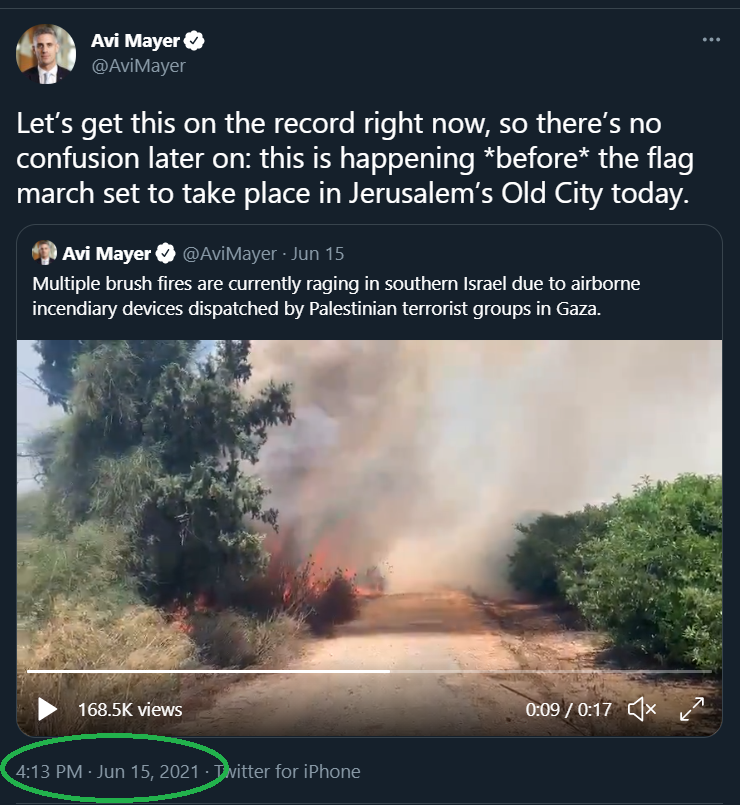 In other words, while Hamas may well have said that the arson attacks “were a response”, by the time this programme was aired, the BBC had had over 24 hours in which to determine that the statement it chose to unquestioningly amplify was not true.

Iqbal then brought in “our man in Gaza”, Rushdi Abualouf, who inter alia claimed that no arson attacks had taken place on June 16th.

Abualouf: “The situation in Gaza this morning is calm, is back. No sign of any more, like, attacks by Israel or any more balloons by Hamas…”

In fact numerous attacks using airborne incendiary devices did take place on June 16th and by the time this programme began at 2 p.m. UK time (16:00 local time) those attacks had been ongoing for at least a couple of hours. 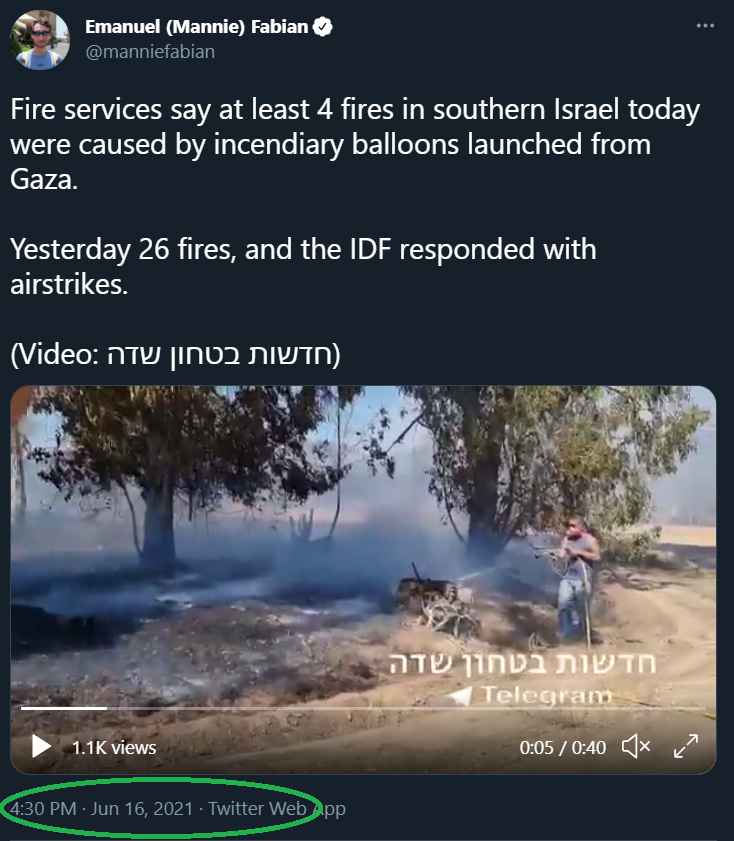 Abualouf: “Israel is demanding Hamas to hand back bodies of two Israeli soldiers who were killed during the fighting back in 2014. This is a condition for easing the restriction of Gaza. Hamas saying that any talks about returning the bodies would be under the swap deal that Hamas is demanding releasing hundreds of Palestinians detainees from the Israeli prisons and they said Israel should ease the restrictions first before we can sit and talk.”