The contrasts in language, tone and narrative focus between a report by Harriet Sherwood on Israel’s November conflict with Hamas and a recent Guardian report on the French war against Islamists in Mali represent an exquisite illustration of the paper’s egregious double standards.

Here’s the headline and strapline for the Nov.18 report (and the still shot from the accompanying video) by Sherwood about one day’s fighting in a 8 day Israeli war against a radical terrorist regime on its border who had fired thousands of missiles at Israeli civilians :

Now here’s the headline and strapline from a Jan. 14 Guardian report (and still shot from accompanying video) by Afua Hirsch and Nick Hopkins about the current French war in a former colony located thousands 0f miles from Paris – waged, in part, to prevent a terrorist state from forming “at the door of Europe“: 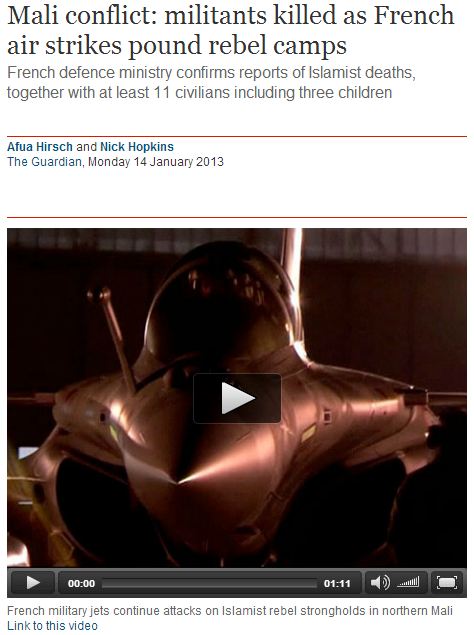 In Sherwood’s report, the deaths of Palestinian children represent the overwhelming narrative focus.  The fact that the IDF was attempting to target Hamas terrorists is only mentioned in the strap line, and even then is qualified with the word “believed”.

In the report by Hirsch and Hopkins, on the other hand, we are informed via the headline that militants are killed, while the deaths of Mali children are only noted at the end of the strap line.

Further, the contrast in videos used by Guardian editors to illustrate each story is also quite remarkable.

The emphasis is clearly on Palestinian civilian casualties.  Also, as you watch the last few seconds of the video note how the narrator explains the contrasting loss of life in Gaza and Israel: She explains that “fifty Palestinian civilians” had been “killed” in the war, while “three Israelis lost their lives“.

Now, here’s the video used to illustrate the story about Mali.

The first thing we see is a French military aircraft.  And, throughout the film there is no mention of the loss of Mali civilian lives as the result of French bombing.

Additionally, the contrasting narrative focus of each story couldn’t be more stark.

Here are the first two paragraphs of Sherwood’s report:

“At least 11 members of one family, including five women and four children, were killed when Israel bombed a house in Gaza City on Sunday as the five-day-old war claimed more civilian lives with no sign of a let-up in the intense bombardment.

The air strike flattened the home of the Dalou family in the Sheikh Radwan district of Gaza City, causing the biggest death toll in a single incident since the offensive began last Wednesday.”

Now, here are the first two paragraphs of the report on Mali.

French fighter jets have pounded insurgent training camps, arms and oil depots as the French defence ministry confirmed reports of Islamist deaths, together with at least 11 civilians including three children.”

Consistent with the headlines and straplines, the text in the report on Gaza focuses on the death Palestinian children, while the report on Mali emphasizes the deaths of Islamist militants – and Mali civilian casualties are only mentioned at the very end of the last sentence.

Moreover, out of 28 total paragraphs in the report on the war in Mali, only 7 (25%) touch on the fate of Mali civilians.

In the report on the Gaza war, out of 24 paragraphs, 15 (63%) focus on the threat to Palestinian civilians.

Finally, while the Jan. 14 Guardian report is only one example of the paper’s coverage of the French war, is there even a possibility that the suffering of civilians in the West African nation will be a significant focus of their future coverage?

While unchallenged lethal narratives about Israel ensure that media groups like the Guardian will continue to meticulously report the details of every Palestinian civilian death as the result of IDF operations against Hamas, such selective humanitarianism will prevent readers from ever learning the names of African children killed by French airstrikes against Islamists in Mali, seeing heartbreaking photos of their bodies on Twitter, or reading tragic accounts of suffering by their grieving parents.