An article appearing on the Middle East page of the BBC News website on June 11th 2013 related to the withdrawal of Austrian members of UNDOF from the Golan Heights.

The article is reasonably impartial, but includes two inaccuracies. It describes the Quneitra crossing as:

“..the only open crossing between Syria and the Israeli-controlled Golan Heights” 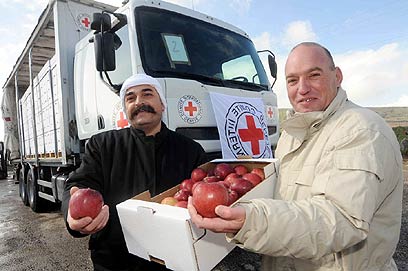 Quneitra cannot be accurately described as an “open crossing” as it is used on a regular basis only by members of UN forces and – with prior co-ordination and after the issue of the appropriate permits – by members of the Golan Druze community studying in Syria. It is also used on occasion by Druze from the Golan villages getting married in Syria or Syrian Druze getting married in the Golan, by Druze pilgrims to Syria and as a point of entry for the trade of apples grown in the Druze villages, with the coordination of the Red Cross. Tourists or civilians who do not belong to the Druze community cannot use the crossing.

“Syria’s deployment of tanks in the demilitarised zone violates ceasefire agreements in place since the Arab-Israeli war of 1973..”

Whilst the Yom Kippur war certainly began in October 1973, the ceasefire agreements only came into being at the end of May 1974.

On the Middle East homepage, the article was presented together with two ‘related articles’, one of which is the BBC’s profile of the Golan Heights.

We have already addressed the subject of inaccuracies in the “overview” section of that profile here, but in the “timeline” section we also find an inaccurately captioned photograph.

That photograph was in fact taken at Mount Bental, which is not “an army position” as claimed by the BBC, but a tourist attraction run by Kibbutz Merom Golan.  The metal cut-out soldier on the left of the BBC’s picture can be seen in the photograph below from the opposite angle – with the site’s decidedly un-military coffee shop in the background.