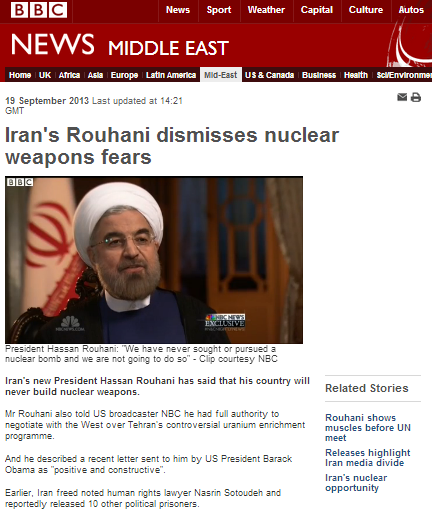 That message was hammered home several more times in the BBC’s report of an interview given by Iran’s new president to NBC on September 19th. The caption to the accompanying video clip reads:

“President Hassan Rouhani: “We have never sought or pursued a nuclear bomb and we are not going to do so”. “

In the body of the report readers are informed that:

“In a wide-ranging interview with NBC News in Tehran, Mr Rouhani said Iran had “never pursued or sought a nuclear bomb and we are not going to do so”.

“We have time and again said that under no circumstances would we seek any weapons of mass destruction, including nuclear weapons, nor will we ever.” “

The only ‘balance’ to the repeated presentation of Rouhani’s statements comes in the form of this paragraph:

“Iran is under UN and Western sanctions over its controversial nuclear programme. It says it is enriching uranium for peaceful purposes but the US and its allies suspect Iran’s leaders of trying to built [sic] a nuclear weapon.”

The BBC makes no effort whatsoever to inform audiences of the IAEA’s assessments of Iran’s nuclear programme, including the remarks made by the agency’s Director General Yukiya Amano just three days before the NBC interview.

“I report regularly to the Board on safeguards implementation in the Islamic Republic of Iran,” the Director General pointed out. “The Agency continues to verify the non-diversion of nuclear material declared by Iran under its Safeguards Agreement. However, Iran is not providing the necessary cooperation to enable us to provide credible assurance about the absence of undeclared nuclear material and activities. The Agency therefore cannot conclude that all nuclear material in Iran is in peaceful activities.” [emphasis added]

But the BBC’s airbrushing of Rouhani’s remarks during the interview does not stop with the nuclear issue. The report states:

“President Rouhani said his government wanted the Iranian people to be “completely free” in their private lives.

He said a “commission for citizens’ rights” was to be set up in the near future.

“In today’s world, having access to information and the right of free dialogue and the right to think freely is the right of all people, including the people of Iran,” he said, according to NBC’s translation of the interview.”

However, as NBC itself reports, there was an important condition to Rouhani’s statement which the BBC has airbrushed out of the picture its audiences receive.

“Rouhani also appeared to pledge his support for increasing Iranians’ access to the Internet and other political and social freedoms.

“We want the people, in their private lives, to be completely free, and in today’s world having access to information and the right of free dialogue, and the right to think freely, is the right of all peoples, including the people of Iran,” he said.

When asked whether his government would stop censoring the Internet, Rouhani said “a commission for citizens’ rights” would be established.

“The viewpoint of the government is that the people must have full access to all information worldwide,” Rouhani replied. “Our opinions on this should based on protection of our national identity and on our morals.” ” [emphasis added]

Interestingly, the BBC has also completely airbrushed from its report any mention of Rouhani’s statements on the Holocaust and Israel during the interview.

“…he deflected a question from NBC News’ Ann Curry about whether he believed that the Holocaust was “a myth.”

“I’m not a historian. I’m a politician,” he replied. “What is important for us is that the countries of the region and the people grow closer to each other, and that they are able to prevent aggression and injustice.” “

With regard to Israel:

“Rouhani described Israel as “an occupier and usurper government” that “does injustice to the people of the region, and has brought instability to the region, with its warmongering policies.”

He added Israel “shouldn’t allow itself to give speeches about a democratically and freely elected government.” “

Of course Rouhani’s government can only be considered “democratically and freely elected” if one is able to persuade oneself that the vetting of candidates by Iran’s ‘Guardian Council’ somehow aligns with the principles of democracy – as Rouhani obviously can – and it is that same process of self-persuasion which allows him to describe Israel as having “brought instability to the region” even as Iran finances terror organisations and supports a regime killing its own civilians.

Beyond the fact that the BBC’s continuing spin of a new ‘moderate’ Iranian president involves gymnastics which are an embarrassment to behold, what is really important is that BBC audiences are not being provided with the full range of information which will “enable individuals to participate in the global debate on significant international issues” – as specified among the BBC’s Public Purposes.

Does the evidence support the BBC’s touting of “less hardline Iranian stance” on nuclear issue?

A BBC theme to watch