At around 18:30 on the evening of Sunday September 22nd Staff Sergeant Gal (Gavriel) Kobi, aged 20, from Tirat HaCarmel was mortally wounded in Hebron. A combat soldier in the Givati Brigade, Gal Kobi was shot in the neck whilst on duty providing security for visitors to the Machpelah Cave in the city on the occasion of Succot. He was evacuated to hospital in Jerusalem, but doctors were unable to save his life.

Just before 23:00 local time Gal Kobi’s name and personal details were made public. Three hours later the BBC published a report on the incident on the Middle East page of its BBC News website. For the second time in two days, despite the fact that a murdered soldier’s name had already been cleared for publication, the BBC failed to include it in the initial version of its report. 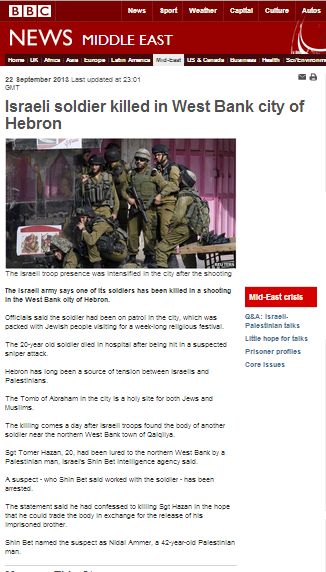 “The Israeli army says one of its soldiers has been killed in a shooting in the West Bank city of Hebron.

Officials said the soldier had been on patrol in the city, which was packed with Jewish people visiting for a week-long religious festival.

The 20-year old soldier died in hospital after being hit in a suspected sniper attack.

Hebron has long been a source of tension between Israelis and Palestinians.

The Tomb of Abraham in the city is a holy site for both Jews and Muslims.”

Information concerning Gal Kobi’s age was released at the same time as his name, hence it is difficult to believe that the BBC could have been aware of one detail and not the other.

The report makes no attempt to explain to readers that under the terms of the Wye River Accords the Machpelah Cave (Tomb of the Patriarchs) is subject to divided access, with Muslims able to access 81% of the site and Jews the remaining 19% on a regular basis. For ten days of the year the entire site is open to Muslims (and closed to Jews) and likewise for ten other days it is closed to Muslims and open to Jews.

This year, two of those ten days fall on September 22nd and 23rd, during the week of Succot. Hence, Staff Sgt. Gal Kobi and his unit were at the location to provide security for worshippers exercising their rights to religious freedom under the terms of agreements signed by the Palestinian Authority.

But rather than explaining that aspect of the incident to BBC audiences, the writer of this article makes do with superficial statements of equivalence: “Hebron has long been a source of tension between Israelis and Palestinians” and “the Tomb of Abraham in the city is a holy site for both Jews and Muslims”.

Such trite statements contribute nothing to BBC audiences’ understanding of the context which lies behind the incident.

Some eight hours after the publication of that article it was amended to include, inter alia, Staff Sgt. Kobi’s name, although it cites his rank as Sergeant despite his having been promoted posthumously.

“Israeli Prime Minister Benjamin Netanyahu responded to the Hebron shooting by authorising Jewish settlers to move back into a building they had previously been evicted from near the scene of the attack.”

In fact, as explained by Ha’aretz, the process of reinhabitation of Beit HaMachpela does not depend on the prime minister alone.

“In April 2012, a group of settlers moved into the house. They said they had purchased the property, which is near the Tomb of the Patriarchs and is known as Beit Hamachpela, after the Hebrew name of that site. After reviewing the deed, the Civil Administration invalidated the purchase, citing faults in the transaction. Under the martial law in the territories, any real estate deal must first be approved by an Israeli army commander.

Since then, settlers in Hebron have been waging a legal battle to gain recognition for the transaction. Defense Minister Moshe Ya’alon has pledged in the past that if the deal is deemed legal, the settlers would receive authorization to move in from the military as well.” […]

“Nevertheless, the purchase must still go through the appropriate bureaucratic channels. In June, an appeals committee ordered that the settlers’ request to register the purchase be reviewed. Contrary to reports, it did not recognize the legality of the transaction, but leveled criticism at the manner in which the deal was denied.

Once this process is completed, the prime minister and defense minister can sign off on the deal and allow the settlers back into the property.

Netanyahu’s statement did not mention a timeline for this process.

The settlers said on Sunday that they will only return to the home once they receive an official authorization.”

In light of the fact that the BBC habitually presents Israeli communities in Judea and Samaria as ‘illegal’, it would have been more conducive to audience understanding of the issue had the BBC bothered to point out to readers of this article that Israelis living in the H2 area of Hebron do so under the terms of agreements which form part of the Oslo Accords to which the Palestinian Authority was a willing signatory.