On November 21st we noted here that – despite the presence of BBC staff in the Gaza Strip at the time – no report had appeared on the subject of the military parades which took place there on and around November 14th.

On November 22nd an article by Yolande Knell titled “Tensions high between Israel and Gaza a year after truce” appeared in the ‘Features & Analysis’ section of the BBC News website’s Middle East page.

Knell opens her article with descriptions of those military parades. She notes that “[m]ore than 170 Palestinians and six Israelis were killed in last November’s clashes” but fails to make it clear to her readers that some 60% of casualties in the Gaza Strip were members of various terrorist organisations, including 71 from Hamas, 17 from the PIJ, six from the PRC and three from Fatah.

In copy-paste style, Knell then repeats the claim made in a previous BBC article on the subject of the anniversary of Operation Pillar of Cloud:

“Israel launched Operation Pillar of Defence, which it said was aimed at ending rocket fire from Gaza, with the assassination of the head of the Qassam Brigades, Ahmed Jabari, on 14 November 2012.” [emphasis added]

Once again, this version of events fails to provide BBC audiences with any of the important context behind the reasons for the operation. The use of the phrase “which it said was aimed at ending rocket fire from Gaza” implies that the BBC is not convinced that the fact that between January 1st and November 13th 2012 (the day before the operation began), 797 missiles had been fired from the Gaza Strip at civilian targets in Israel – one hundred and twenty-three of them between November 10th and 13th alone – was reason enough for Israel to take action to stop those terror attacks.

“While its strong rhetoric against Israel continues, Hamas has largely kept to its pledge to prevent rocket fire.”

Her next sentence, however, indicates that “to prevent rocket fire” – a la BBC – means the launching from territory controlled by Hamas of over fifty missiles at civilian targets: in other words, an average of one terror attack a week.

“The Israel Defence Forces (IDF) says that since Operation Pillar of Defence about 50 rockets have been launched from Gaza, compared with 1,500 the previous year.”

Knell then goes on to inform her audience that those missile attacks are not so bad:

“Those fired have caused little damage, landing in open areas or being intercepted by Israel’s Iron Dome missile defence system. However, civilians in their range are still forced to run for cover whenever the “red alert” siren sounds.”

The breathtaking banality of Knell’s downplaying of the effects of regular terror attacks on civilians is enabled by the fact that since the end of last November’s hostilities (and likewise before their ‘official’ commencement on November 14th 2012) no BBC reporter has made the 90 minute journey from Jerusalem to Sderot or Ashkelon in order to bring to BBC audiences the experiences and viewpoints of residents of those areas still subject to regular missile attacks.

Whilst the number of missile attacks (most of which have been ignored by the BBC) has indeed decreased since the end of last November’s operation, past experience of the similar situation after Operation Cast Lead in 2008/9 shows that trite reporting of mere numbers conceals a much more complex picture. 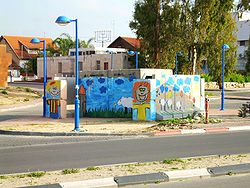 “Hila Barzilai, the director of the Sderot Resilience Center (Merkaz Hosen) recently told Sderot Media Center that in the past six months following Operation Cast Lead, hundreds of Sderot children have turned to the resilience center for therapy treatment.

“These kids come to us with their parents to seek therapy for the trauma built up from years of rocket attacks,” says Barzilai. “These problems did not just begin post-Operation Cast Lead. We are talking about eight years of constant rocket attacks whose psychological effects are now emerging during this period of calm.” […]

The average recovery period for a child can take up to eight months or more, said Barzilai. One of the challenges of trauma patients face in the recovery process are the sporadic rocket attacks that still continue to hit Sderot and the western Negev region.

Barzilai notes in frustration that “it takes one rocket attack to destroy any progress in the patient’s therapy. The siren alert will trigger the flashbacks of terror and fear in the child or adult, which means that the therapy process has to begin anew.” […]

Orna Hurwitz, the director of the Sderot Bon Tone Hearing Institute, told Sderot Media Center on Monday that hearing loss has become an ailment unique to Sderot and Gaza-border residents.

“The hearing impairments suffered by residents of Sderot are akin to the hearing loss that soldiers experience during war. The repeated blasts of the rocket explosions harm the ear drum to the point that many residents have to be treated for hearing loss, dizziness, tinnitus, and/or central auditory processing disorders,” says Hurwitz.”

And yet, the BBC continues to avoid telling this story in full, thus compromising its obligation to “[e]nable individuals to participate in the global debate on significant international issues”.

Another missile attack on Israeli civilians ignored by the BBC

Missiles fired into Israel not news for the BBC

Not news for the BBC