St James’s Church’s Rector Lucy Winkett’s defence of her church’s installation of a replica of Israel’s security fence in a piece for ‘Comment is Free’ is a legal and moral failure (Bethlehem Unwrapped is about ‘beautiful resistance’, not taking sides’, Jan. 2).

First the legal side. She states that Israel’s security fence is “illegal under international law”. It is incredible that so many non-lawyers (and a few actual lawyers) state this with such ease when there is little proper evidence of such “illegality”.  Rector Winkett is relying on the 2004 Advisory Opinion of the International Court of Justice. A frame repeatedly projected on to St James’s Church’s replica wall states “In 2004, the International Court of Justice in The Hague stated the security fence was illegal and it should be dismantled.”

But an advisory opinion is just that; advisory and an opinion. It sets no legal precedent.

There are legal opinions for and against Israel’s security fence, but for Rector Winkett to declare the fence “illegal under international law” makes a mockery of her claim at ‘Comment is Free’ that “we are not ‘pro’ one side or another”.

On the moral side Rector Winkett derides as “irresponsible” those who claim “we are aligning ourselves with those who support the Holocaust, suicide bombings or that we are antisemitic”.

But Rector Winkett’s wish for Israel’s security fence to come down will encourage suicide bombers sent by the likes of Islamist terror group Hamas to resume their murder of Israeli civilians, including those living on the West Bank, which the fence has successfully disrupted.  (Indeed, the Hamas Charter specifically calls for the murder of Jews, and their leaders have explicitly called for the annihilation of the Jews.)

And then there are the organisations that St James’s Church has expressly aligned itself with for Bethlehem Unwrapped.

Sami Awad, director of the Holy Land Trust (a pro-Palestinian group with ties to Hamas and other terror groups), might believe in “beautiful resistance” but that doesn’t exclude a belief in violence. Awad is on record as saying that such non-violent resistance “is not a substitute for the armed struggle.“

Incidentally, all net proceeds from Bethlehem Unwrapped go to the Holy Land Trust. (That is should there be any net proceeds, the cost of the 12 day replica security fence installation being an incredible £30,000.)

And War On Want and the Israeli Committee Against House Demolitions are part of the Boycott, Divestment and Sanctions movement, a movement that campaigns for Israel’s destruction.

Rector Winkett writes in her ‘Comment is Free’ piece that all viewpoints are listened to without exception and that visitors have been allowed to write a prayer or message of peace on the wall and that anything offensive has been immediately removed. She also writes that most conversations have been respectful.

Sadly, many have not been. A woman going in to St James’s Church for Bethlehem Unwrapped’s comedy evening responded to a question about the Holocaust with “What Holocaust?” A supporter of Israel was called a “friggin Jew” and “quenelle4 ever” appeared on the replica security fence (see middle of replica fence below written in blue): 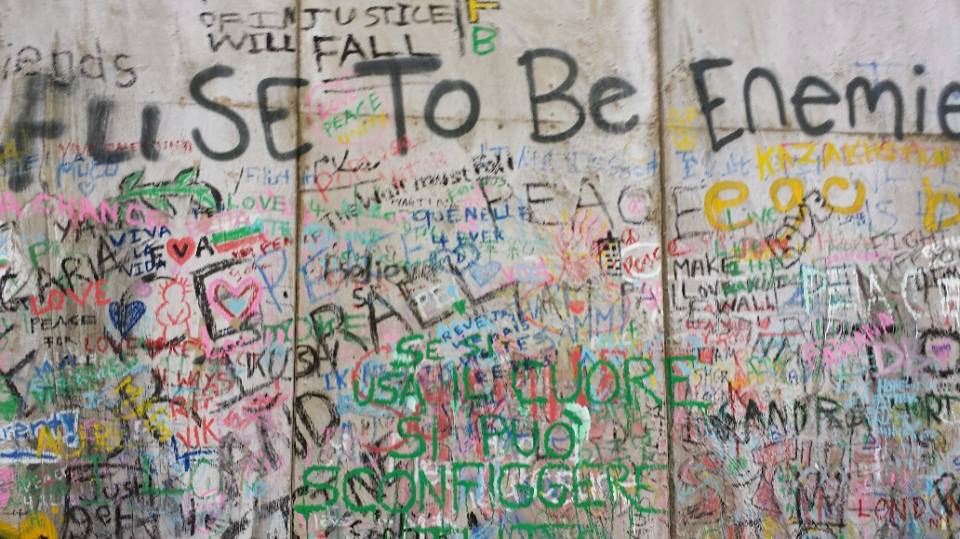 Rector Winkett also writes that people have written “this wall saves lives”. However, this was subsequently changed to “this wall enslaves lives”.

Bethlehem Unwrapped is not a respectful project however much Rector Winkett is trying to convince us. It mocks Israel’s legitimate attempts to save precious lives.

And it fails to recognise even the possibility that the main problem for Bethlehem’s Christians is not the security fence at all but intimidation and violence by Hamas similar to that carried out by Islamists elsewhere.

Moreover, St James’s Church’s Bethlehem Unwrapped festival has attracted antisemites, Holocaust deniers, those campaigning for the destruction of Israel and those who condone violence to that end.

This may not have been St James’s Church’s intention but this is what has happened and for this Rector Winkett should apologise to Britain’s Jewish community which is bearing the main brunt of the backlash.

The biggest irony is that St James’s Church itself is protected by a security fence; a tall metal fence that contains a locked door. When the door is unlocked it is heavily guarded. Some may call this a checkpoint.

St James’s Church is, understandably, protecting itself from anyone harbouring ill feeling towards it and who may be inclined to carry out an atrocity similar to those carried out against Churches in Syria, Iraq, Pakistan, Nigeria and Egypt by militant Islamists.

Israel is doing the same.

0 replies on “Israel’s “beautiful resistance” to suicide bombers: A response to Lucy Winkett”