Of the 3,356 missiles fired at civilian targets in Israel by terrorists in the Gaza Strip between July 8th and August 5th 2014, 69.4% were fired from the northern part of the territory with the towns of Beit Lahia and Beit Hanoun being major centres of missile fire, cross border tunnels and other terrorist activity.

But viewers of Jon Donnison’s filmed report (heavily promoted on his Twitter feed) of August 5th – which, in addition to being broadcast on BBC television news, appeared on the BBC News website’s Middle East page under the title “Gaza truce holds as residents return to destroyed homes” – would never have known that even one missile was fired from Beit Hanoun or that fierce battles took place there when Israeli soldiers went in to decommission cross-border attack tunnels and missile launchers, with terrorists using the local houses as sniper positions.

“Ahmed is 80. He’s survived half a dozen wars in Gaza and a lifetime of struggle. He’s just returned to find his family home destroyed – for the third time. Mohammed is one of 34 grandchildren. He’s salvaging what he can from the rubble of what is his fourth war. He’s only fourteen. This was Ahmed’s bedroom; a room with a view. A mile away in the dust you can see the Israeli tanks withdrawing. Ahmed was a head teacher. He taught history. He’s no Hamas supporter but says this war did not start a month ago with rockets and airstrikes. It’s about Israel’s decades-long military occupation and land.”

Israel has of course not occupied the Gaza Strip for nine years and the major towns and cities in Judea & Samaria have been under PA control for nearly two decades, but Donnison sees no need to spoil the narrative by informing BBC audiences of the facts.

Ahmed: “We want this returned to us now. Gaza Strip and the West Bank.”

Donnison: “Will you stay?”

Of the 3,356 missiles launched by terrorist organisations at Israel during the past four weeks, four hundred and seventy-five landed inside the Gaza Strip. Many residential homes were booby-trapped by the terrorists, to the extent that when the IDF informed the residents of Beit Hanoun that they could return to their homes, that message also came with a warning to beware of explosives still in place.

“The area around a school in Beit Hanoun had booby-trapped houses. Every house was suspicious. One soldier returned fire at a sniper in a window – and the whole house exploded in on its inhabitants. This has happened with several buildings.”

Jon Donnison, however, knows without any shadow of a doubt what caused the damage he films extensively in Beit Hanoun. 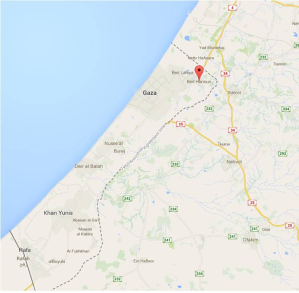 “Israeli bombs also destroyed the family business – a chicken farm. The coops are gone. The birds are dead. Ahmed and his son Khalil also grow fruit and vegetables. But Israel’s blockade of Gaza, which Hamas wants lifted as part of a ceasefire deal, killed their trade. The blockade is not just about what comes into Gaza – it’s about what goes out.”

Donnison makes no attempt whatsoever to inform audiences that the restrictions on the entry of dual-use goods into the Gaza Strip are aimed at curbing the type of terrorist activity which brought about the border restrictions in the first place. He intentionally misrepresents the topic of agricultural (and other) exports from the Gaza Strip: in 2012/13 for example, over 842 tons of agricultural produce was exported from Gaza via Israel, along with 12.2 million flowers.

“And this tiny stretch of land, which has seen so much destruction, is less than a third the size of London. Palestinians feel trapped in a cycle of death, destruction and rebuilding. This will not be the last war but once again, Gaza has been crippled. The healing will take years. Some will never recover.”

Clearly Jon Donnison remains on Hamas PR campaign message, promoting context-free images and descriptions of damage and civilian suffering without even a whiff of a mention of terrorist activity in Beit Hanoun. His promotion of a non-existent “military occupation” of the Gaza Strip and of the notion of farmers unable to export their agricultural produce because of a “blockade” he fails to explain also conforms perfectly with the Hamas narrative currently being vigorously promoted. The fact that there is no truth to those notions obviously does not disturb Jon Donnison – or his employers – in the least.