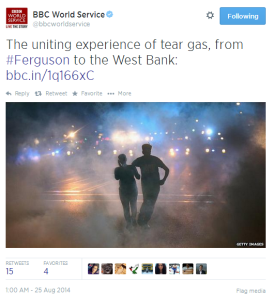 The item promoted is from the August 23rd edition of the BBC World Service radio programme “Boston Calling” and it can be heard here. The presenter introduces the segment as follows:

“Keeping communities safe seems like it should be the very first duty of any police officer but that mantra has been cast under a shadow in Ferguson – a small city just outside St Louis in the state of Missouri. That’s where the police shot Michael Brown – an unarmed 18 year-old African American – catalysing a protest movement that quickly descended into violent clashes between demonstrators and authorities. ‘Welcome to Fergustan’ people said. Perhaps that’s too flippant a way to describe the scene there but the phrase does capture the sense of chaos on the ground; the kind of chaos that’s familiar to Daniel Estrin. He’s a reporter based in Jerusalem. He’s also a native of St Louis and as he found out, he’s not the only one connecting dots.”

The item then cuts to Estrin’s audio report which was already featured previously on Boston Calling’s sister programme ‘The World’ on PRI, with a very similar transcript being available here.

But what the BBC World Service promotes as a simple story of people on different continents finding “Tear Gas Camaraderie” as it is dubbed in the segment’s title is actually not quite as straightforward as it seems.

“Some opposed to the police force in Ferguson have pointed out on Twitter that the former head of the St Louis County police received counterterrorism training in Israel. Others have Tweeted that the two situations are not alike.”

Why the editor of this BBC World Service programme found it news-worthy to advance a conspiracy theory promoted by anti-Israel activists and cooked up by someone widely held to be a lobbyist for the Iranian regime is a mystery.

No less notable is the fact that Estrin’s account fails to clarify to listeners the political motives behind the ‘camaraderie’ of the Palestinian activists he cites: the attempt to paint Palestinian rioters and African-American demonstrators in Ferguson as mutual victims of racist policies. That motive can be easily discerned in the statement of solidarity signed, among others, by two of the people quoted in his report – Mariam Barghouti and Linah Alsaafin – which includes the following in its preamble as it appeared on Electronic Intifada.

“Although Ferguson and Palestine are two different contexts, both places and their people are fighting against white supremacist regimes of oppression which continue to view them as “disposable others” and act accordingly.” […]

“But the Civil Rights, anti-apartheid and anti-colonial movements in the United States, South Africa and foreign colonies across the African continent in the past offer us various models from which we should learn. In the present, Palestinians (though this does not apply to sell-outs such as Mahmoud Abbas and his minions) stand up against the despotism which the US, the settler-colony known as Israel, and various European and Arab governments embody.”

In other words, BBC World Service radio has provided free publicity for a political campaign which seeks to promote the inaccurate notion of Israelis as “white colonialists” and to procure sympathy and support for anti-Israel activism and terrorism by depicting those involved as ‘civil rights’ campaigners.

Far from assisting BBC audiences to build an “understanding of international issues“, this thinly disguised promotion of political activism does the exact opposite.