In mid-2019 the BBC produced quite a lot of coverage of the Palestinian Authority’s financial crisis which had been exacerbated by its earlier refusal to accept tax revenue transfers from Israel.

That refusal (which the BBC did not report was reversed after seven months) came after Israel began deducting the amount of money paid by the PLO to imprisoned terrorists and the families of terrorists killed while perpetrating attacks against Israelis from the tax revenue and customs duties it collects on the PA’s behalf in accordance with the terms of the Oslo Accords.

When the law that defined those deductions was passed in July 2018, BBC audiences saw some rare coverage of the PA’s payment (via the PLO) of salaries to terrorists but it still remains an issue which goes serially under-reported and it is hence not surprising to see that a related recent story has not received any BBC coverage to date.

As Khaled Abu Toameh reported at the Jerusalem Post:

“On February 9, the IDF Central Command issued amendment No. 67 to a key security order. This transformed facilitating the PA’s payment of monthly salaries to prisoners into a prohibited terror-financing action.

The new IDF legislation, which went into effect yesterday [May 9th -Ed.], declares “that any person who conducts any transaction with assets, including money, in order to facilitate, further, fund, or reward a person carrying out terror-related offenses, is himself committing an offense punishable with 10 years in prison and a substantial fine.””

Ahead of that amendment coming into effect, some bank accounts belonging to  convicted terrorists were closed.

“Many Palestinians who served time in Israeli prisons for terror offenses have complained in recent days that they have been unable to access their bank accounts to receive monthly stipends paid out by the Palestine Liberation Organization, and have been told to switch banks if they want to continue receiving them, the Haaretz daily reported Thursday.” 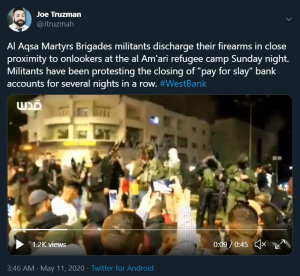 “Overnight Thursday, a bank in Jenin that announced it would have to close the accounts where the PA deposits the stipends was shot at, damaging the building.”

According to Reuters another branch of the Cairo Amman Bank was torched and there were also reports of demonstrations by armed men apparently from one of the Palestinian factions.

Shtayyeh said his office has reached agreement with the banks to freeze their action until a committee established to look into the issue presents its recommendations. […]

Last week the Palestinian Monetary Authority, the Palestinian Prisoners’ Affairs Commission, the Association of Banks in Palestine and the PA Ministry of Finance set up a joint committee to study the repercussions of the new Israeli legislation, which criminalizes the salary payments to the prisoners.”

Just as it has not found the Palestinian Authority’s formation of a committee designed to enable the continuation of payment of millions of dollars to terrorists newsworthy, the BBC has also to date ignored an additional story relating to PA finances.

“Israel will reportedly begin transferring a loan of NIS 800 million ($228 million) to the Palestinian Authority on Sunday to help offset financial losses caused by the coronavirus pandemic.

The government notified the High Court of the transfer on Thursday, the Israel Hayom daily reported, saying the funds will be transferred in several installments over the coming months.

According to the report, Finance Minister Moshe Kahlon said Prime Minister Benjamin Netanyahu had directed him to provide the PA with the loan.

The move was said to be made in coordination with Defense Minister Naftali Bennett and National Security Adviser Meir Ben-Shabbat.”

Interestingly, while in late April the BBC had no qualms about advancing a narrative concerning a “West Bank economy, weakened by decades of military occupation”, it clearly has considerably less interest in informing its audiences about the Palestinian Authority’s terror supporting financial priorities and a loan from the country it claims is ‘occupying’ areas that have been under exclusive PA control for decades.

BBC NEWS SILENT ON PA CLIMB DOWN OVER TAX REVENUES