The BBC News website’s presentation of its recent report on Mahmoud Abbas’ speech at the UNGA (discussed here) included several ‘related articles’ offered to readers both on the Middle East homepage and in the article itself as complimentary information on the topic. Among those articles was one originally published on August 8th under the title “Gaza conflict: The hundreds who lost their lives“. 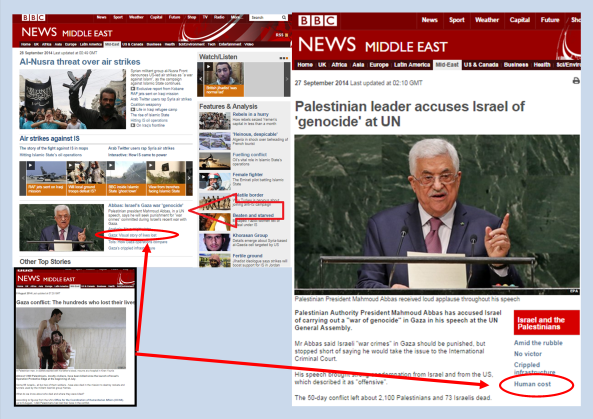 Not only is that feature long out of date but – as we pointed out here when it originally appeared – it is also inaccurate on the topic of Israeli casualties with both its text and a graphic claiming to inform readers “where people were killed” presenting incorrect information.

“The article also includes some glaring inaccuracies with regard to Israeli casualties.

“Meanwhile, two Israeli civilians died in Haifa and near the Erez border crossing into northern Gaza; and a Thai farm worker was killed in Ashkelon.”

In fact, the locations of casualties in Israel from missile fire by terrorists in the Gaza Strip are as follows:

Jul 15, 2014 – Dror Hanin, 37, of Beit Aryeh was killed near the Erez Crossing after suffering a direct hit from a mortar fired by terrorists in the Gaza Strip, while delivering food to soldiers there.

Jul 19, 2014 – Ouda Lafi al-Waj, 32, was killed and three members of his family were injured, when a rocket fired from the Gaza Strip struck a small Bedouin settlement near Dimona.

Jul 23, 2014 – Narakorn Kittiyangkul, 36, from Nan’s Pua district in Thailand was killed by a mortar fired from Gaza while working in a greenhouse in one of the Israeli communities in the Ashkelon Coast Regional Council.

Dimona is nowhere near Haifa and the Ashkelon Coast Regional Council (Hof Ashkelon) is not the city of Ashkelon.”

Although this feature has remained available to BBC audiences online since its original publication nearly two months ago, no effort has been made to correct its inaccuracies. The editorial process which lies behind the continued promotion of a feature which is both so obviously out of date and incorrect must surely be called into question.